Announcement of accepted documentaries from around the world to screen in Chagrin Falls, Ohio from October 12 to 16 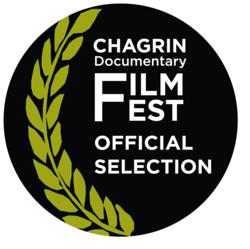 Last year’s inaugural Chagrin Documentary Film Festival took Cleveland film lovers by storm. The Festival was not simply entertaining; it challenged and provoked our thoughts and imagination with compelling and beautifully crafted films ...

The Chagrin Documentary Film Festival is proud to announce the acceptance of the following films to be screened at this inspiring festival from October 12 to October 16, 2011. Tickets will be available for purchase, beginning September 5, 2011, at the Festival website: http://www.chagrindocumentaryfilmfestival.org.

Festival film categories and the accepted films in each include:
Community Documentary: Breaking Through (USA) by Muarianna Zingarelli, Where Hope Works (USA) by Ted Alcorn, To Go Forth (USA) by Rachel Rood, Apostol Karamitev (Bulgaria, Italy, USA) by Max Freeman, A Walk Along the Day (Italy) by Filippo Ticozzi, The Grandfathers (USA) by Jim Hanon

International Documentary: In the Hearts of Africa (USA, Congo) by Ed Lachman, From Nomad to Nobody (Canada) by Michael Buckley, Tales From A Walled City (Croatia, USA) by Surbhi Dewan, Little Town of Bethlehem (USA) by Jim Hanon, My Sister Tikva (Israel) by Vered Berman, The Referee (Sweden) by Mattias Law, Hidden Truth (UK) by Penelope Machipi, Living Downstream (Canada) by Chanda Chevannes, Bob Marley: The Making of a Legend (Jamaica, UK) by Esther Anderson

The inaugural Chagrin Documentary Film Festival was held in October of 2010 and included over 90 documentaries from 26 countries. Mary Ann Ponce, Festival Director, states, “ We congratulate the accepted films and are proud to present a Festival which gives a voice to talented filmmakers.” Marc Benson, President of Hamlet Village commented, “Last year’s inaugural Chagrin Documentary Film Festival took Cleveland film lovers by storm. The Festival was not simply entertaining; it challenged and provoked our thoughts and imagination with compelling and beautifully crafted films from all over the world."

The Chagrin Documentary Film Festival is a program of Fevered Dreams Productions, a non-profit, 501(c)3 organization dedicated to enabling talented filmmakers to tell their unique stories. All donations are tax deductible as provided by law.