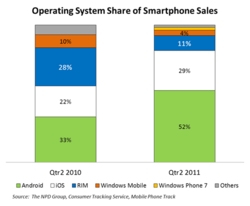 Much as it did in the feature phone market in the RAZR era, Motorola is experiencing increased competition from Samsung and LG in the smartphone market. Closer ties to the heart of Android can help inspire new paths to differentiation.

“Google’s acquisition of Motorola shifts the balance of power in the handset-patent conflict between Google and its operating system competitors,” said Ross Rubin, executive director of industry analysis for NPD. “Android’s momentum has made for a large pie that is attractive to Motorola’s Android rivals, even if they must compete with their operating system developer.”

“Much as it did in the feature phone market in the RAZR era, Motorola is experiencing increased competition from Samsung and LG in the smartphone market,” Rubin said. “Closer ties to the heart of Android can help inspire new paths to differentiation.”

Beyond the four largest national carriers, Motorola can also make up ground in the rapidly growing pre-paid smartphone market. Based on the latest information from NPD’s “Mobile Phone Track,” one in five new handsets acquired in Q2 was on a prepaid plan, and carriers offering prepaid mobile phones continued to grow their smartphone portfolios. In Q2 2010 just 8 percent of prepaid phones were smartphones, but in Q2 2011 that number jumped to 22 percent.

"Android is also leading the charge in the rapidly growing prepaid smartphone market,” Rubin said. “This was once a key segment for Motorola that the company has an opportunity to reclaim as prepaid carriers build their smartphone portfolios.”

Data Note: The information in this press release is from “Mobile Phone Track” – NPD’s consumer tracking of U.S. consumers, aged 18 and older, who reported purchasing a mobile phone. NPD does not track corporate/enterprise mobile phone purchases.

About The NPD Group, Inc.
The NPD Group is the leading provider of reliable and comprehensive consumer and retail information for a wide range of industries. Today, more than 1,800 manufacturers, retailers, and service companies rely on NPD to help them drive critical business decisions at the global, national, and local market levels. NPD helps our clients to identify new business opportunities and guide product development, marketing, sales, merchandising, and other functions. Information is available for the following industry sectors: automotive, beauty, commercial technology, consumer technology, entertainment, fashion, food and beverage, foodservice, home, office supplies, software, sports, toys, and wireless. For more information, contact us or visit http://www.npd.com/ and http://www.npdgroupblog.com. Follow us on Twitter: @npdtech and @npdgroup.