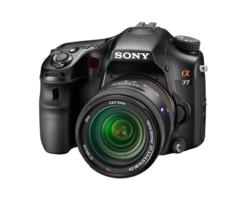 The top gun among the three cameras is the Sony alpha SLT-A77, a burly, weatherproof magnesium-alloy DSLR that—in addition to JPEG and RAW capture (up to 12 frames per second)—can also capture HD AVCHD 60p/60i/24p video, including uninterrupted sequences of up to 29 minutes in length. Other features found on the SLT-A77 include a 19-point / 11-cross AF system; ISO sensitivity levels up to 16,000; a built-in GPS for geotagging; Auto HDR and Dynamic Range Optimizer (DRO); dual memory card slots (SD/SDHC/SDXC & Memory Stick PRO Duo & PRO-HG Duo); 1200-zone evaluative exposure metering; shutter-lag times as short as 0.05 second; and up to 530 exposures per charge.

The viewing system on Sony’s new top-gun SLT consists of a 3.0”, 921,000-dot hi-def, three-way tilt/swivel LCD that maintains alignment of the LCD and lens; and the world’s first 2,359,000-dot OLED electronic viewfinder (EVF), which enables clarity that simply blows away any other EVF in its class.

Other unique Sony technologies found on the SLT A77 include a choice of 2D or 3D Sweep Panorama mode; a Handheld Twilight mode for tripod-free shooting under the lowest of lighting conditions; SteadyShot INSIDE image stabilization with all Sony Minolta AF optics; in-camera Auto HDR, a detailed onscreen graphic display; and a Shot Result Preview, which allows you to preview the visual effects of your exposure, WB, DRO, DOF, and other mode choices before you press the shutter button.

The Sony SLT-A77, which is compatible with all Sony alpha A-mount optics, also features an HDMI output for viewing your stills and video on Sony BRAVIA and other Sony-compatible HDTVs.

Slightly smaller and less expensive—though equally able—is the polycarbonate-bodied Sony alpha A65 which, along with Sony’s new 24.2MP APS-C imaging sensor, shares most all of the features found on the pro-oriented Sony alpha A77. Aside from the size, price and body construction materials, the only other differences between the A65 and A77 are continuous burst rates (10 frames per second vs. 12 frames per second); the number of focusing points (15-point AF system with three cross sensors vs. 19-point with 11 cross sensors); and the number of pops per battery charge, which at 560 exposures is actually 30 more than the 530 pops you can get out of the A77.

The third new camera from Sony is the pocket-sized Sony alpha NEX-7, which shares the same 24.2MP APS-C imaging sensor found in its larger DSLR siblings. A huge improvement over its very capable but LCD-only predecessors, the Sony NEX-7 features the same 3.0”, 921,000-dot tiltable LCD and the 2,359,000-dot OLED electronic viewfinder found on the A77 and A65.

Additional Sony-specific imaging features found on the Sony alpha NEX7 include a choice of 2D or 3D Sweep Panorama modes; a Handheld Twilight mode for tripod-free imaging under the lowest of lighting conditions; SteadyShot INSIDE image stabilization; Object-Tracking AF for quick-moving subjects; in-camera Auto HDR; a built-in flash (GN6); a Peaking function for precision manual focus; an HDMI output; Auto HDR and Dynamic Range Optimizer (DRO) for enhanced shadow and highlight detail; and an Intelligent AF mode that pre-focuses the scene as you compose it.

The Sony alpha NEX-7 is compatible with all Sony E-mount optics, as well as optics from other manufacturers, via optional lens adapters.

The new Sony NEX-5N, which will be available in silver or black, should begin arriving on our shelves by the end of August, 2011.

About B&H Photo Video
As the world's largest source of photography, video and audio equipment, B&H Photo-Video is known worldwide for their attentive, knowledgeable sales force, and excellent customer service, including fast, reliable shipping. Visitors to the website can access a variety of enlightening articles and educational videos. B&H has been satisfying customers worldwide for over 35 years.