Foulain, France is fast becoming a focal point for world peace as the organizers of Lothlorien Peace Festival 9/21-24 http://www.lothlorienfestival.com/, and the sponsors of the Know Thyself Initiative (KTI), with the many presenters at the festival unite in calling for a 3 Day Moratorium on All News September 22-24 to Stop the World for Global Meditation on Peace before comet Elenin’s alignment on the 26th. Encouragingly, many more of the world’s peacemakers, including the Council of World Elders and Tony Burroughs, are adding their names to the call because they see this as a unique opportunity to shift the mass consciousness from conflict and despair to cooperation and hope. 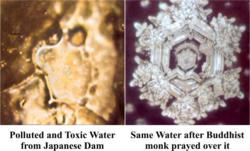 Love and compassion are necessities, not luxuries. Without them humanity cannot survive.
Dalai Lama

The Reason for the call for a 3 Day Moratorium on the news is to utilize the energies generated by both Elenin and a global meditation on peace. Leyland Carney, http://www.lescarney.com an organizer of the Peace Festival and director for the I.D.E.A. Foundation who sponsors KTI elucidates further by saying: “The opportunity to change direction is being afforded through the Cosmic Convergence caused by the comet Elenin passing between the sun and the earth on September 26th.

Attesting that everyone can be a part of this “wonderful opportunity” Leyland adds, “Obviously not everyone can attend the Lothlorien Peace Festival in Foulain, France to be with spiritual teachers like Dr. Carl Johan Calleman, http://www.calleman.com (who is leading the meditation) Dr. Masuru Emoto, the Hopi, Mayan, and many Indigenous elders. However everyone can participate in generating Peace by sharing in both large and small gatherings wherever they are and visualizing their intentions of a world united in Peace.”

The reason a small percentage of the world meditating on peace can affect nearly 7 Billion people Leyland says, "Is explained by the goal of the movement; to create a critical mass of people taking a time out from business as usual for the 3 Day Moratorium to focus on peace. The critical mass number is 144,000, which concerns the energy of numerology referring to the number 9, as in 1+4+4+000 = 9 and representing completion and Divine Will. Because both the day of the global meditation on peace 9/23/2011, and the Mayan Calendar designating this period the 9th wave, the energy of 3x9s is present. In numerology tripling anything increases its energy exponentially, which is why there is a unique opportunity here. In short, if 144,000 individuals can step out of this world for 3 Days, (3 Days = 72 hours 7+2=9) and identify themselves as world peacemakers on the map, http://www.triple7center.com which represents a microcosm of the world, they will cause a shift in the mass consciousness."

In view of the efficacy of visualization, the organizers were delighted when Tony Burroughs http://www.visionalignmentproject.com/totalalignments.html the creator of The Vision Alignment Project stepped forward as a co-partner in finding the 144,000. Tony’s project reaches close to half a million individuals focused on peace worldwide, which means in a blink of an eye his project could find 144,000 world peacemakers to align with the 3 Day Moratorium, while visualizing a united world and shift the consciousness.

Suzzan, http://www.triple7center.com/777_KTIsMessage.html who together with her husband Craig Babcock are responsible for KTI, relates that the feeling of the need to stop the world is growing. She sees this in the “Serendipity” presented in a group e-mail she received from Oprah Winfrey. “In the e-mail Oprah insightfully observed: ‘The world is a mess. We all know it and talk about in our private lives. It's depressing…at times to look at how much potential we have and yet we're constantly bombarded by images and information that speaks to the lowest common denominator. We can do better. We can be better. I know it's true.’”

Apart from the 144,000 world peacemakers, everyone can add their energy to the shift in consciousness. Even if the concept of visualization is just a little too “out there” Suzzan assures us that: “Everyone can as Gandhi said ‘Be the change you want to see’ and participate.” For those immersed in everyday life, she observes: “Quantum physics, has demonstrated we affect matter by our thoughts. Today we’re faced with a barrage of negative news adding to the stress and anxiety already experienced at intolerable levels by many. Unfortunately, because of our inter-connectedness, this has the affect of not only lowering the individual’s consciousness, but also the collective consciousness. Even so, because of the energies being generated by Elenin and the Global meditation everyone can help transmute this energy. Simply by focusing on positive thoughts we not only change our individual physical composition, we effect a change in our shared reality. Consequently, we are asking those who want to help for the three days between September 22 and 24 to abstain from:

In respect to the abstaining from using obscenities, Leyland adds: “We say abstain from obscenities not for moral purposes, but purely as an energy value. These words lower the vibration, even when spoken in jest. When our speech reflects our higher natures, and we abstain from negative input, then we shift the consciousness to a higher reality.” As an elder, he also sees the three days moratorium on the “news as usual” as having an interesting correlation with the Mayan prophecy of ‘Three Days of Darkness’. He questions: ”Could it be that three days without our reality being framed by the 'news as usual' is a symbolic means of entering a 'news blackout' and emerging on the other side into a world with a 'new light' that is spoken of by the Maya? In a metaphorical manner, perhaps this is a means by which we emerge into a magnificent world of Peace.”

Relating that once people have disconnected from the general flow of negativity Leyland explains, “They will be using the principle of Eckhart Tolle’s Power of Now or if you prefer: ‘being in the world, but not of it.’ The important thing is for individuals to keep their minds occupied with positive thoughts. Everyone involved in the Peace Festival believes in the innate goodness of human beings. Given the opportunity to make a difference in the world, most people will jump at it. The three day moratorium on “news as usual” provides a way for us to ‘take back our power’ as we:

Pledge to focus on Love & Compassion for ALL Life seeing the world united in peace.”

Again Leyland says: “When we speak of Love we are speaking of the All-powerful Creative Force that permeates the universe giving life to all and is experienced as a mother holding her newborn baby for the first time, or the first sight of breath-taking natural beauty like the Grand Canyon, or star-filled sky. This kind of love has power to change us in every way; Dr. Emoto’s work with sounds/words and emotions affect on water crystals demonstrates this beautifully.” http://masaru-emoto.net/

It seems as though the message to take back our power and get involved is everywhere and even singers like Katy Perry are trumpeting the call to step forward. Suzzan believes Katy’s inspired lyrics for Firework could be the signature song for the goal of the Peace Festival and 3 Day Moratorium on news: “Do you know there’s still a chance for you. Cause there’s a spark in you? You just gotta ignite the light and let it shine…”

Leyland sums up the goal of the 3 Day Moratorium: “Consciousness is neutral and will reflect our focus. If we are immersed in fear, stress and anxiety, the negative grows until it dominates the mass consciousness. What we are proposing is to take a time-out from this stimulus; in effect stopping the world by disconnecting from the ‘news as usual’ reality spin. When practiced, participants at every level will connect with others focused on Peace. This creates a unity consciousness where the Positive energy of Peace expands exponentially to cause a shift in the mass consciousness.”