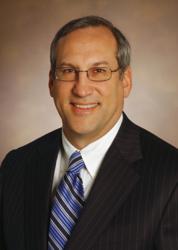 To LUHS, Goldberg, 49, brings the insight of a veteran of academic medicine as well as the skill of a strategic business leader. At Vanderbilt University Medical Center, Goldberg led a multi-year strategic positioning initiative for the medical center, including the clinical, academic and research enterprises, aimed at improving profitability. Also while at Vanderbilt, he oversaw the planning and construction of a 141-bed critical-care patient tower and supported the development of the Vanderbilt Heart and Vascular Institute.

“Larry is a remarkable leader who will serve Loyola University Health System and Trinity Health with distinction and expertise in academic medicine,” said Joseph R. Swedish, president and CEO, Trinity Health. “He also brings a strong commitment to excellent patient care. We are delighted to have him join us.”

Goldberg will replace Daniel G. Hale, who has been serving as LUHS' interim president and CEO since July 1, 2011, when the health system became a part of Trinity Health, an organization of 47 hospitals based in Novi, Mich. Hale is executive vice president of the Trinity Institute for Health and Community Benefits at Trinity Health.

He served on the board of the Hospital Alliance of Tennessee since 2005 and was its chairman from 2008-2010. Goldberg also is the current chairman of the board of Middle Tennessee e-Health Connect, a position he has held since 2010.

A frequent presenter and lecturer, Goldberg is a thought leader on healthcare reform and the economics of medicine. He remains involved with numerous charitable organizations including the American Heart Association, the American Cancer Society, the Partnership to Educate & Advance Kids, and is the founding member of the board of directors for the Joseph G. Nicholas Foundation for the Promotion of Youth Education.

About Trinity Health
Trinity Health is the fifth-largest Catholic health care system in the country. Based in Novi, Mich., Trinity Health operates 47 acute-care hospitals, 401 outpatient facilities, 31 long-term care facilities, and numerous home health offices and hospice programs in 10 states. Employing more than 53,000 full-time staff, Trinity Health reported $7.0 billion in unrestricted revenue in fiscal year 2010. As a not-for-profit health system, Trinity Health reinvests its profits back into the community through programs to serve the poor and uninsured, manage chronic conditions like diabetes, health education and promotion initiatives, and outreach for the elderly. In fiscal 2010, this included nearly $460 million in such community benefits. For more information about Trinity Health, visit http://www.trinity-health.org or become a fan of the Trinity Health Facebook page at http://www.facebook.com/trinityhealth.