Based on the Tourism Authority of Thailand's forecast record 19 million inbound visitors to the kingdom in 2012, golf tourism could be worth $US 2 billion to Thailand next year. Three percent - or 600,000 - of all foreign tourists are expected to come to play golf. 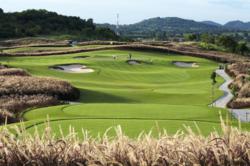 It could be our best season ever. The political situation is calm, there have been no natural disasters [elsewhere] to deter tourism, and Thailand's cultural capability to attract tourists remains streets ahead of other markets.

Led by growth from Australia and Europe, the value of foreign golf tourism to Thailand may reach 60 billion baht or $US 2 billion in 2012 for the first time.

Based on a Tourism Authority of Thailand forecast for a record 19 million inbound visitors to the kingdom next year, up to 600,000 foreign golf tourists - or three percent of the total - will make a beeline for its five major golf destinations: Bangkok, Phuket, Hua Hin, Pattaya and Chiang Mai.

According to Mark Siegel, whose company Golfasian is one of Thailand's major inbound golf tour operators, foreign golf tourism into Thailand is continuing to grow, while he says golfers spend an average of 100,000 baht ($US 3,300) each on the ground - three times the average of other tourists.

With Thailand's major golf courses reporting strong early bookings and forecasting growth above 2011, the estimated 57 billion baht ($US 1.9 billion) spent in Thailand by more than 500,000 inbound golf visitors this year should nudge 60 billion baht spent by up to 600,000 foreign golfers in 2012.

"It could be our best season ever," Mark Siegel says. "The political situation is calm, there have been no natural disasters [elsewhere] to deter tourism, and Thailand's cultural capability to attract tourists remains streets ahead of other markets."

The surge in golf tourism to Thailand will entrench the kingdom as by far Asia's most popular destination for foreign golfers and one of the top three other golf destinations behind market leader Spain, which attracts almost a million golf tourists a year.

Even traditional golf destinations such as Scotland, Ireland and England - or the United States - can't match Thailand's year-round golf appeal, with prices about half the cost of most western markets. Thailand has 260 golf courses - 60 fewer than Spain, 200 fewer than Scotland and 100 less than Ireland.

Two new awards are adding to Thailand's overall tourism aura. Bangkok has been voted the world's best city by readers of Travel & Leisure magazine in the United States, while Thailand is the world's fourth best country to visit and Phuket is the world's 10th best island destination, according to UK magazine Condé Nast Traveller.

Although supplying only 10 to 15 percent of Thailand's golf tourists compared with 65 percent from Europe, the strong Australian dollar and extra flights into Thailand are bringing more Australian golfers. Importantly for many tour operators and courses, Australia's winter brings golfers from Down Under in Thailand's low season between May and September, while Europeans overwhelmingly favour the November to March high season during their winter.

Rising long-haul demand and improving numbers from Japan and Korea also means members of Golf in a Kingdom: The Thai Golf Experience, a co-operative marketing group comprising Thailand's top golf courses and hotels, are expecting a bumper high season from November to March and ongoing strong demand throughout 2012.

"There has been a dramatic improvement [in bookings]," says Prasertchai Phornprapha, managing director of Siam Country Club near Pattaya, a two-course complex that relies purely on pay-as-you-play visitors and is expecting to host 50,000 foreign golfers in 2012, half its total expected numbers. "When there is peace in Thailand it is the destination of choice because of its culture and value for money," he says.

Bangkok's exclusive Thai Country Club, named by Asian Golf Monthly last year as Thailand's best course and first runner-up in Asia, is also expecting a bumper season. General manager T.W. Hughes says his optimism follows one of the best high seasons ever in 2011. "We believe this year will be at least equal to last year and perhaps even better, given those who experienced TCC are likely to want to repeat their experience. The course will be in the best condition in years and we continue to make upgrades in and around the rest of the club."

Stacey Walton, the general manager of Banyan Golf Club at Hua Hin, 200 kilometres south of Bangkok, says the Tourism Authority of Thailand has done a good job in rebuilding Thailand's image after protests in Bangkok during the past two years severely disrupted tourism for several months at a time. "We should see results from that," he says. "November to February is looking especially strong and as the golf hub of Asia, Thailand will reap the benefits."

Harald Ellison, general manager of nearby Black Mountain Golf Club, says forward bookings from Scandinavia, northern Europe and the United Kingdom are encouraging. The club, owned by Swedish interests, which hasn't missed a day's golf since it opened in 2007, will bring a new par-3 course into play by the end of the year to accompany its core 18-hole layout. The new island-dotted mini-course with water on every hole and heavy bunkering will be a test for golfers of all levels and is expected to be played by a large number of Black Mountain's visitors.

Meanwhile, the Thai Government has high hopes for continued strong tourism growth over the next four years. Earlier this month, Deputy Prime Minister and Tourism and Sports Minister, Chumpol Silpa-archa, announced a target of at least 30 million foreign inbound tourists by 2015, who he said were expected to generate national revenues of 1.4 trillion baht or $US466 billion at current exchange rates.

If achieved, the target would almost double inbound arrivals in just five years. And if inbound golf market's share and expenditure remain at current levels, golf tourism will contribute 150 billion baht ($US 4.5 billion) to the Thai economy four years from now.