Palm Springs Life has announced it will present The Stars of Project Runway on Wednesday, March 21, during the seventh annual Fashion Week El Paseo (March 17-27, 2012). The event features eight Project Runway winners and all-stars, some of which appear in the current season of the wildly popular TV show Project Runway All Stars. 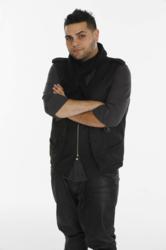 “This is a rare opportunity for the public and Project Runway fans to enjoy this one-night only event and see eight of their favorite Project Runway stars up close and personal along the runway,” says Susan Stein, co-producer of the event.

Palm Springs Life has announced it will present The Stars of Project Runway on Wednesday, March 21, during the seventh annual Fashion Week El Paseo (March 17-27, 2012). The event features eight Project Runway winners and all-stars, some of which appear in the current season of the wildly popular TV show Project Runway All Stars.
“This is a rare opportunity for the public and Project Runway fans to enjoy this one-night only event and see eight of their favorite Project Runway stars up close and personal along the runway,” says Susan Stein, co-producer of the event and fashion editor of Palm Springs Life.

At Fashion Week El Paseo, The Stars of Project Runway will feature Michael Costello and Mondo Guerra, who helped set the event’s attendance records with their appearance in 2011. This year, six other Project Runway winners and all-stars join them for a night of cutting-edge fashion in their own runway shows.

The following evening, on Thursday, March 22, the Project Runway personalities will make their stellar designs available during an exciting trunk show.

The Stars of Project Runway Stars feature new collections by the following designers:

Michael Costello appeared in Season 8 of Project Runway and is now among the Project Runway All Stars. He began creating designs when he was only 4 years old. At 14, he designed his first couture collection, earning him a review and listing in Vogue magazine's article, “Los Angeles' Hidden Talent.” At 16, following his tenure at the Fashion Institute of Design Merchandising in Los Angeles, he took a one-year internship with Bob Mackie. Costello is now recognized for his own show-stopping red carpet gowns.

Mondo Guerra’s innovative style and bold designs won him praise as a runner-up in Season 8 of Project Runway and joining the elite Project Runway All Stars. Based in Denver, Guerra gained recognition for his early Technicolor collections. His Project Runway creations consistently placed him in the top three ranking, and he claimed victory for three consecutive challenges. The judges praised him for impeccable construction and styling, masterful mixing of prints, and fearless use of color.

Mila Hermanovski was selected from thousands of applicants in 2009 to compete in Project Runway, Season 7. She earned a finalist spot and showed a Fall 2010 collection at Mercedes-Benz Fashion Week in New York. Her collection was extremely well received by critics and potential consumers alike. Hermanovski is competing in Project Runway All-Stars.

Michael Drummond is an award-winning designer and Season 8 contestant. His eco-friendly clothing line The Exquisite Corpse consists of mostly end-run and recycled fibers. Heidi Klum is a client and the New York Post hailed it “Visionary.” Drummond has worked in all facets of stage, screen, and runway.

Kara Janx, a Season 2 finalist, has seen her career skyrocket and is now in the new season of Project Runway All Stars. Her designs reflect her degree in architecture and an innate sense of color. Her women’s collections include her killer kimono dresses in a multitude of unexpected color combos along with superb dresses and chic tops. The South-African designer, now a resident of New York, launched her bridal line in Spring 2011.

Joshua Christensen of Snohomish, Wash., left a career in banking to pursue his love of fashion. A Fashion Institute of Design & Merchandising graduate, Christensen auditioned for Project Runway and became a Season 9 contestant. When not taping Project Runway All Stars, he designs for the Alastaire Grey label and says that David Beckham would be a dream client. Joshua says he’s inspired by everything from Korean pop music to films and loves an all-American look.

Seth Aaron (Henderson), the Season 7 winner, showed a 10-piece collection that included coats, dresses and separates during Mercedes Benz Fashion Week in New York, and the judges his to be the best of the three collections on the catwalk. Originally from San Diego, Aaron has worked as a freelance stylist and fashion designer. His work has been greatly influenced by music, particularly New Wave, punk, '80s Goth, Brit rock. He currently resides in Vancouver with his wife, Tina, and two children, Aaron and Megan.

Gordana Gehlhausen, originally from former Yugoslavia, appeared in Season 6. She showed her creative flair early on with her unique style of dress and knitting her first sweater when she was only 7 years old. She earned a degree in linguistics in Germany, before she moved to the United States where she sharpened her design skills by creating a children’s line. She later moved to Charleston, S.C., where she opened her first women’s boutique, GOGA. While maintaining her store in South Carolina, Gehlhausen recently relocated to San Diego and opened her second women’s wear boutique, GOGA by Gordana, featuring her own designs.

Fashion Week El Paseo takes place under in the Big White Tent on El Paseo, the Coachella Valley’s most fashionable shopping district, and features the best of West Coast design all under one roof during a thrilling week of nightly runway shows, trunk shows, champagne receptions, after parties, in-store events, and events to benefit local charities.

Palm Springs Life is the essential lifestyle magazine for the greater Palm Springs communities, offering richly drawn celebrity profiles; intelligent features on contemporary culture, art, architecture, and lifestyle trends; a who’s who on the desert’s vibrant social scene; and the ultimate guide for what to do, where to go and what to wear. Palm Springs Life has enriched the lives of residents and visitors from around the world for more than 50 years, a rare feat in publishing.