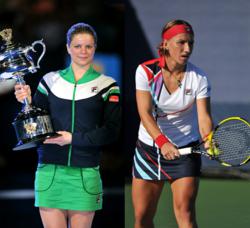 Both players are longtime members of the Fila family and have played an important role in Fila’s rich history in tennis.

“We are thrilled to extend our relationship with Kim Clijsters and Svetlana Kuznetsova,” said Gene Yoon, Chairman of Fila. “Both players are longtime members of the Fila family and have played an important role in Fila’s rich history in tennis. Kim and Svetlana, who are joined by new brand ambassadors Vera Zvonareva and Jelena Jankovic, are ideal representatives of Fila’s core values. Their athleticism, drive and passion exemplify the true beauty of sport that has inspired our brand for over a century.”

Kim Clijsters, who is an inspiration to tennis fans and mothers around the world, has won 41 Sony Ericsson WTA Singles titles and 11 WTA Doubles titles so far in her career. In just her third tournament after returning to tennis in 2009, she turned a US Open wildcard into a history making win to become the first unseeded player to win the US Open and the first mother to win a Grand Slam since Evonne Goolagong-Cauley in 1980. With a renewed passion for the game, Kim went on to win the 2010 Australian Open and WTA Championships. In 2011, she won her fourth Grand Slam in Australia.

Svetlana Kuznetsova has been a consistent and formidable competitor on the WTA Tour since her break-out, Grand Slam title winning season in 2004. Since then, she has ranked in the Top 20 for seven out of the last eight seasons and has won 13 Singles titles and 14 Doubles titles. In 2009, Svetlana won her second Grand Slam at Roland Garros and captured her 14th Doubles title with Mauresmo.

Kim and Svetlana will debut Fila’s spring 2012 Center Court apparel collection at the Australian Open in Melbourne. Visit http://www.fila.com to see the full collection of Fila tennis apparel and footwear.

Fila has a long and distinguished history in the world of tennis that continues with endorsements and sponsorships that include agreements with ATP Tour and WTA Tour athletes. Fila is a sponsor of the Sony Ericsson Open, the BNP Paribas Open and the Campbell’s Hall of Fame Tennis Championships. Fila is also the footwear licensee of The Championships at Wimbledon.

In 2011, Fila celebrated its centennial anniversary, a milestone for this historic brand established a century ago by the Fila brothers of Biella, Italy. Fila is now a leading manufacturer of sport and leisure footwear and apparel distributed worldwide. The internationally respected company, having gained world-class recognition in tennis apparel, has developed brand recognition by marketing high design and style content products that are endorsed by professional athletes from around the world.