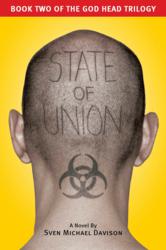 “I have traveled within all seven continents and was able to draw upon personal experience for this next installment of the adventure.”

The recently released “State of Mind” will have two follow-up sequels to complete its story arc for what author Sven Michael Davison is calling his “God Head Trilogy.” The second book in the series is titled “State of Union.” The story and action take place on a worldwide scale focusing on Antarctica, Brazil, China, India, Mexico, and North America. “State of Union” will be released in the fall of 2012.

“I have traveled within all seven continents and was able to draw upon personal experience for this next installment of the adventure,” states Davison.

There will be plenty to tease “State of Union’s” release in the months ahead. Details for the third and final book title will be announced later this year.

Sven Davison was raised in Denver, graduated NYU with a bachelor’s degree in film, and has worked as a trailer copywriter at Paramount Pictures and a staff screenwriter for several other smaller production companies. Davison currently oversees the linear content and menu production at 1K Studios, which is employed by most major film production companies.