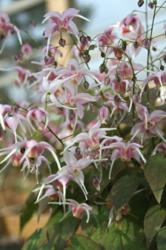 About Plant Delights Nursery
Plant Delights Nursery is a mail-order/ internet plant nursery and botanical garden that has been in business since 1988. Plant Delights holds four public open houses per year: two weekends each in winter, spring, summer, and fall. Plant Delights Nursery sells rare and unusual perennials from around the world. Many of their plants were discovered by co-owner, Tony Avent, during his more than 66 plant hunting expeditions to exotic places such as Argentina, China, Crete, and South Africa, as well as over 40 botanizing trips in the US. Plant Delights Nursery and owner Tony Avent are frequently profiled on television (including The Martha Stewart Show and Almanac Gardener), in magazines (including Southern Living, Horticulture, and Fine Gardening) and in newspapers (including the New York Times, Houston Chronicle, Chicago Tribune, and News & Observer). Proceeds from Plant Delights Nursery support the Juniper Level Botanic Gardens, a six acre research and genetic preservation garden with over 18,000 different plants.