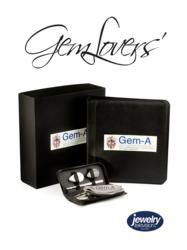 We understood that our viewers are passionate about gems and jewelry, so the commitment to develop a GemBasics course with the Gemmological Association of Great Britain was a logical extension of our vision.

Jewelry Television® and the Gemmological Association of Great Britain announced a collaboration on an introductory online gemology course called GemBasics. More than a year and half in development, the online course was designed to address the educational needs of JTV’s viewers and fill an existing void in gemological education.

Jewelry Television selected Gem-A since the organization is the world’s longest established provider of gem and jewelry education. In addition to the GemBasics course developed for JTV, Gem-A offers multiple courses that provide advanced training and education in the fields of gems and jewelry. Gem-A courses are used in 25 countries around the world.

“As part of our vision to bring the world of gems and jewelry to all our viewers, JTV quickly realized the need and desire for continuing education. To that end, we developed an online Learning Library that provides articles by trade experts, a glossary of gem and jewelry terms, an E-publication called In the Loupe, and an extensive treatment and disclosure chart that is the most comprehensive available,” said Gerald D. Sisk Jr., graduate gemologist and co-founder of JTV. “We also offer seminars and conferences as part of our ongoing commitment to education. We understood that our viewers are passionate about gems and jewelry, so the commitment to develop a GemBasics course with the Gemmological Association of Great Britain was a logical extension of our vision.”

Developed in cooperation with Dr. Jack Ogden and the educational staff at Gem-A, GemBasics includes all the necessary components for completion; tools, gemstones and written course material, consisting of 12 lessons, are augmented by online video and technical support. Students are allotted a 12-month study period. After successful completion of the final exam, students are awarded a statement of achievement and acknowledged as a Gem-A Colored Stone Associate.

“Understanding gems is about recognizing the beauty of nature. For a hundred years, Gem-A has had the privilege of introducing people to the world of gemology and we are greatly looking forward to working with JTV to share our passion with an even wider audience,” Sisk said.

About JTV
Jewelry Television® is the only broadcast shopping network that focuses exclusively on the sale of jewelry and gemstones. The privately-held company was founded in 1993 and broadcasts high definition programming 24 hours a day, seven days a week, to more than 80 million unique households in the U.S. Jewelry Television® was recently ranked the 13th largest retailer of jewelry in the U.S. by National Jeweler. JTV.com is the fifth largest jewelry destination on the internet according to Internet Retailer’s Top 500 Guide for 2010. For more information, visit JTV.com.

About Gemmological Association of Great Britain
The Gemmological Association of Great Britain, or Gem-A, is the world’s longest established provider of gem and jewellery education. Their Diploma in Gemmology is the direct descendant of the gem course that was proposed for the UK jewellery trade in 1908. Their prestigious Diplomas in Gemmology and Diamonds, taught around the world, are now globally recognized as qualifications of the highest status. Diploma graduates may apply for election to Fellowship (FGA) or Diamond Membership (DGA) of the Association.