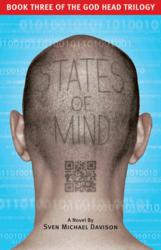 The conclusion is mind blowing.

On October 28, 2012, “State of Union,” Sven Michael Davison’s second novel in his God Head Trilogy, was released into stores. With its central plot device of immunization as a way to invade a body and take over a person’s mind, the pub date is apropos to flu shot season.

THE ENEMY LIES WITHIN…

After living on the fringe of society for five years, Jake Travissi returns to civilization to find that a recent nano-virus epidemic has killed millions worldwide. Implanting a Personal Chip (a device which enhances the mind with the capabilities of a smart phone and personal computer, but also creates a window for hackers) into the brain is the only cure. As if this wasn’t bad enough, Jake has been asked to kill his former LAPD colleague Joaquin Parks. Parks is now the head of a church accused of nuclear terrorist acts around the world. Meanwhile, the dawn of Artificial Intelligence and the promise of immortality could be just around the corner…

“The follow-up to ‘State of Mind,’ Sven’s award winning start to his God Head Trilogy, takes the storyline to an exponentially higher level.” States Jeannine Patton, Senior Vice President of Bedouin Press’ publicity department. “We are very pleased with the initial reviews.”

State of the Union is like getting smashed in the face with a circuit board. It’s as paranoid as Phillip K. Dick, but has the same tech head smarts as Neil Stephenson. This ferocious follow-up to State of Mind is faster, and easier to sink your teeth into. - Daniel Kucan, author of the Full Contact series and star of A&E's "Sell This House: Extreme"

I find it disturbing that I see present-day indications that this could actually be the case. But, by far, the most frightening aspect in this captivating story is the possibility of "enhanced" or genetically engineered animals. READ THIS BOOK! - Mary C. "Home Spun Remedies"

The third and final installment to the God Head Trilogy is titled “States of Mind” and will be released on April 15, 2013. “The conclusion is mind blowing.” Patton elaborates.

THE CHILD OF DARKNESS IS LIGHT…

Through the viral form of The Chip, The Consortium has solidified their rein over the Earth. Freedom’s last hope lies with the free colonies on the moon, Artificial Intelligence, and the will power of Jake Travissi. But another AI is born from the minds who would control us, and he has no interest in the weakness of flesh.

Having lost everything, Jake joins the resistance in the ultimate battle to bring back free will. From tank battles in Riyadh to sabotaging the International Space Agency’s station in orbit around the earth, Jake is sucked into a maelstrom of conflict which lands him on the moon to face the solar system’s most vicious foe, an AI named Constantine who feels humanity’s exit from the universe is long overdue.

In a final battle for the survival of the human race and his own mind, Jake travels to Riyadh, Kennedy Space Center, Guilvinec, Vancouver, Banff, Washington DC, Silicon Valley, Denver, and the Moon. But once again Jake must determine what is real and what is illusion crafted by his ruthless AI enemy to misdirect the human race.

The first book “State of Mind,” is a finalist and winner of two Dan Poynter’s Global eBook Awards.

"A classic near-future techno-thriller, with layers of intrigue, interesting twists and just a dash of pulp mixed in for good measure. Sven Davison's State of Mind is an engrossing journey through a well-considered and completely plausible world."


“State of Mind” is a tense, thoughtful and well-paced sci-fi tale drawn from Davison’s life, imagination and his experiences with technological innovation. – Pod Cast Interview by Bryan Reesman

"State of Mind"Davison's first book in his God Head Trilogy