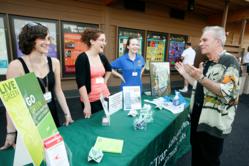 Earlier this month, Virginia Green chose the Wolf Trap Foundation for the Performing Arts as one of five winners of the 2012 Virginia Green Travel Stars Award. Wolf Trap was recognized in the category of Most Innovative Green Project for its "Go Green with Wolf Trap" program, which celebrates the relationship between art and nature through the promotion of environmental awareness and responsibility, as well as the integration of sustainable green practices. The Virginia Green Travel Stars Awards are presented for the second consecutive year as part of the Virginia Green program, a statewide campaign that supports environmentally friendly practices in the tourism industry. The winners were formally announced on October 25, 2012 at the VA-1 Tourism Summit in the Richmond Marriott Hotel.

“We are honored to receive this wonderful recognition, and are grateful to Virginia Green for the opportunity to participate in this campaign,” said Terrence D. Jones, President & CEO of the Wolf Trap Foundation. “As a partner with the National Park Service to operate our country’s only National Park for the Performing Arts, it is our duty to make the vital connection between the arts and the natural world, and to communicate the message of conservation to our audiences and supporters. "Go Green with Wolf Trap" has become a crucial step in our path to environmental consciousness through the arts.”

The nonprofit Wolf Trap Foundation for the Performing Arts works together with the National Park Service in a model public/private partnership to operate Wolf Trap National Park for the Performing Arts, which has been a registered Virginia Green Attraction since 2009. Wolf Trap Foundation for the Performing Arts has long been committed to sustainability and plays a leadership role in the performing arts industry as one of the first performing arts organizations in the country to implement a formal "Go Green" program. The Foundation is committed to sustainability and focuses on reducing its environmental impact each year, and inspiring other arts organizations toward sustainability. Since 2007, Wolf Trap’s landfill diversion has increased by 50%, energy usage decreased by 23%, and overall carbon footprint has decreased by 20%. In 2011, Wolf Trap decided to make an even more significant impact by focusing its efforts on impacting the lives of the 500,000 patrons who attend concerts and events at the Filene Center at Wolf Trap National Park each year. "Go Green with Wolf Trap" actively shares the facility’s waste reduction and energy and water saving efforts with visitors to inspire and challenge them to make changes in their lives to help the environment. The "Go Green with Wolf Trap" campaign consists of educational programs, signage, and announcements during performances. One of the most successful efforts has been the outreach effort entitled “The Green Spot”, which has been held in conjunction with more than a dozen performances, featuring environmental efforts at the park and within the community.

Wolf Trap also promotes environmentalism among audiences and the performing arts industry by incorporating green messages in education programs at the Wolf Trap Institute for Early Learning Through the Arts, as well as in performances for children at Theatre-in-the-Woods and for adults at the Filene Center.

Virginia Green is Virginia’s campaign to promote green practices in tourism. It is a voluntary, recognition program that is run through a partnership between the Virginia Tourism Corporation, the Virginia Department of Environmental Quality, and the Virginia Hospitality & Travel Association. Started in 2007, Virginia Green now has more than 1000 participants, including hotels, restaurants, attractions, conference centers, visitor centers, wineries, parks, campgrounds, and many other supporting organizations.

About Wolf Trap Foundation for the Performing Arts
Wolf Trap Foundation for the Performing Arts, a 501(c)(3) nonprofit, founded by Catherine Filene Shouse (1896-1994), produces and presents a full range of performance and education programs in the Greater Washington area, as well as nationally and internationally. Wolf Trap features three performance venues, the outdoor Filene Center and Children’s Theatre-in-the-Woods, both located at Wolf Trap National Park for the Performing Arts, and The Barns at Wolf Trap, located down the road from the park and adjacent to the Center for Education at Wolf Trap. The 7,028-seat Filene Center is operated in partnership with the National Park Service and annually showcases an extensive array of diverse artists, ranging from pop, country, folk, and blues to classical music, dance, and theatre, as well as multimedia presentations, from May through September. The Barns is operated by the Foundation year round, and during the summer months is home to the GRAMMY-nominated Wolf Trap Opera Company, one of America’s outstanding resident ensemble programs for young opera singers. Wolf Trap’s education programs include the nationally acclaimed Wolf Trap Institute for Early Learning Through the Arts, Children’s Theatre-in-the-Woods, a diverse array of arts education classes, grants, and a nationally recognized internship program that was included in Bloomberg BusinessWeek’s 2009 List of “Best Places to Intern.” As part of its ongoing commitment to protect and preserve the environment, Wolf Trap offers metro access and is a founding member of the Green Music Group. Visit the Wolf Trap website at http://www.wolftrap.org for more information.