HolGenTech Inc., a pioneer in genome interpretation, announces that the USPTO issued patent No. 8,280,641 for a “Utility of Genomic Fractals Resulting in Fractals of Organisms” to founder Dr. Andras Pellionisz. 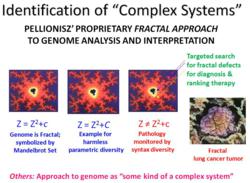 With time a Microsoft or Google type IT will acquire – or build – an IT-led pharma.

This method and system is critical to the application of industrial genomics in clinical settings, most especially in the fight against cancer. The computation of genomic fractal defects can parse individual diversity from pathology, and thus represents a quantum leap in early diagnosis, personal therapy, and genome-based drug development.

Pursuant to decades of research in applying mathematics to neuroscience and genomics, Pellionisz, who has three doctoral degrees, submitted his provisional application on August 1st, 2002. Recognition by the US government may well have been delayed due to its cross-disciplinary nature. The greatest hurdle was most likely the required paradigm shift — moving from the “Junk DNA” model to a fractal iterative recursion paradigm, which was initially perceived by many as a “lucid heresy.”

The status quo began to give way a few years ago, beginning with the results from the ENCODE Project, when in 2007 its leader Francis Collins urged the scientific community to “re-think long held fundamentals.” Such progress was made in Pellionisz’s presentation at George Church’s meeting in Cold Spring Harbor, Sept. 16, 2009. Another landmark was the publication by Eric Lander et al. in the Oct. 9, 2009 of Science, featuring the Hilbert-fractal of a genome on the cover.

“A protracted period of examination was costly and occasionally painful, but the issue could not be better timed for deployment,” said Pellionisz. He was delighted that legal recognition arrived via an “Issue Notification,” dated September 12, 2012. It was a heady time. The notice came less than a week after the release of 30+ papers from ENCODE on September 6th, 2012 — again concluding that “Junk DNA” was a myth.

Progress accelerated in 2008, when Pellionisz disseminated his new approach in a peer-reviewed publication on “The Principle of Recursive Genome Function.” He was also the guest speaker that year for a Google Tech Talk entitled “Is IT Ready for the Dreaded DNA Data Deluge?”

As the old school of thought has finally come to an end, a new program based on recursive fractal iteration can proceed at full steam.

Pellionisz was also decorated in Hyderabad, India on the anniversary of the first decade of the “eureka moment of FractoGene” on February 15, 2012. There he announced the first independent experimental proof of concept, showing that fractal defects are implicated in cancer. He also accurately predicted that within six months about half a dozen further confirmations were likely to appear.

“Dr. Andras Pellionisz’s openness to involving the subcontinent in a global transformation of genome informatics for his fair share lends a remarkable opportunity to India,” stated Prof. Erithrean Rajan, Director of the Pentagram Institute, who invited Pellionisz to a Three-State Guest of Honor Keynote Speech and lecture tour. Prof. Rajan writes:

The Big Picture that Pellionisz is promoting for India lends a special opportunity for Bharat to catch up to China, where the Beijing Genome Institute (BGI) in Shanzhen pursues genomic syndromes in a strategic relationship with Merck Beijing, with sequencing, analytics and clinical trials pursued abroad by the USA to optimize economic feasibility by outsourcing.

Prof. Rajan’s comments are timely, given that BGI tendered an offer to acquire Complete Genomics at a depressed price once it sustained a $520 million loss of valuation due to the predicted “Dreaded DNA Data Deluge.” Pharma expert Dr. Karoly Nikolich quoted Ernst & Young in their 2009 Churchill Club YouTube video, “With time a Microsoft or Google type IT will acquire – or build – an IT-led pharma.”
The algorithmic approach to fractal recursive genome function appears to be perfectly timed, given the recently announced $3 billion “moon shot” cancer program of M.D. Anderson. Underscoring the vital importance of his invention, Pellionisz points to the hundreds of millions of people gravely suffering from genome regulation syndromes amidst global economic hardship.
Pellionisz is delighted to be among those who have lived to witness their scientific paradigm-shift come to pass and bear fruit in practical applications.
Dr. Pellionisz can be reached at holgentech [at] gmail [dot] com