New Israeli political party headed by New Yorker Danny Goldstein lays out plan for peace in the Middle East based on multi-country financial cooperation ahead of 2013 Knesset Member elections. 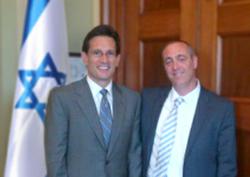 If major shopping malls were to be placed at strategic points along the borders between Israel and its neighboring countries, with entrances accessible from both sides, it would bring people of all nationalities and beliefs together.

Peace in the Middle East can be achieved through joint business ventures amongst countries in the region, according to Danny and Benny Goldstein of New York, founding members of the new Israeli political party the Calcala, which was formed May 1, 2012.

Danny Goldstein said the party is releasing their idea of a shared commerce network between countries in order to drive their election to the Knesset in 2013. They said their ideas to achieve peace may sound far-fetched but new ideas must be placed on the table.

“Any solution that has been proposed until now has not worked, and nothing conventional ever will,” Danny Goldstein said.

The Calcala party hopes to take six to eight seats in the 2013 Knesset elections and will immediately begin to form business relationships with neighboring countries, Goldstein said. The Knesset is made up of 120 members from different political parties within Israel; the set up is similar to that of the Congress, he said.

Goldstein said the goal of Calcala, meaning finance in Hebrew, is to create business opportunities between Middle Eastern countries on shared border land to create revenue for each country, resulting in more jobs, peaceful business practice and no need for relentless war. Goldstein has two words to describe his plan.

Goldstein said he realizes that this may be a radical solution to an even more radical problem, but he firmly believes that tactically placed malls and other businesses will begin to bring a wave of peace over the region.

“All people love shopping and food,” Goldstein said. “If major shopping malls were to be placed at strategic points along the borders between Israel and its neighboring countries, with entrances accessible from both sides, it would bring people of all nationalities and beliefs together.“

Goldstein has mapped out a plan for these shopping malls that cover zoning, security issues, taxes (he proposes these malls be tax-free), and promoting products produced in the Middle East. Goldstein’s vision does not stop there. He sees Hotels, promenades, and even water parks at 6 separate locations overlapping both sides of the border. Goldstein said he believes that connecting people in this way will encourage coexistence and harmony.

The result of building economic stability between Middle Eastern countries will be an end to weapons manufacturing and war, he said. Opening trade throughout the region will result in millions of jobs being created. The high unemployment rate currently plaguing the region is one of the major reasons there is constant war, he said.

Creating jobs and increasing the revenue for each country in the Middle East will result in the countries being incredibly involved with each other financially and recreationally, Goldstein said. There won’t be a need to fight for land because leaders of these countries will see the benefits of sharing natural resources like oil and water as well as technology to continue to bring the added revenue of each business operation, he said.

Danny Goldstein, a self-proclaimed self-made businessman from New York, moved with his family to Israel at 7 years old when his parents made Aliyah in 1971. Danny and his brother are fluent in both English and Hebrew and are both United States citizens, which Danny said is important because he wants people in both America and Israel to know they will have a true ally in the state of Israel. On top of this, Danny said he is fluent in one other language, which is the base of his philosophy; finance.

“Money is a universal language; one that speaks to every person in every walk of life,” Goldstein said. “Every person wants to be able to earn a good living and be able to buy things that enhance his or her lifestyle.”

Danny said the Calcala does not swing left or right and the party is open to joining any coalition that will work toward benefiting Israel and the Middle East as a whole. He and his brother have already drafted many proposals to benefit Israel. However his vision of peace in the Middle East goes beyond just trade.

Goldstein cited the American Civil War as an example of how Israel could benefit from opening its borders. A hundred and fifty years ago, the North and South were two separate countries with two different belief and commercial systems. Although it took much time and bloodshed, the reuniting of the North and South created the America that is known today, in which travel and trade is conducted freely between all of the states. Goldstein sees the conflict between Israel and its neighboring Arab countries as being somewhat similar.

“Just as we can’t imagine a United States without the freedoms and way of life we enjoy today,” he said, “I envision a Middle East that enjoys those same freedoms.”

Whether Calcala and the Goldsteins will make it through in the next elections is unknown. What is certain is that Goldstein believes in his cause wholeheartedly and is doing everything in his power to gain supporters in Israel, the United States and countries around the world to push the Calcala party and their plan for peace forward.

Danny Goldstein with Congressman Peter King Chairman of Homeland Security, after a privet meeting about the Middle East Boarders.