Mayors, Ambassadors, and Experts Gathered at the Second Annual Ljubljana Forum in Slovenia to Share Strategies and Technologies to Make Cities Better 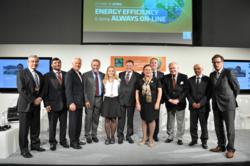 Mayors and other attendees of the Ljubljana Forum 2012

We began with our future vision in Ljubljana 2035 report which is leading our way to become the Green Capital of Europe.

“The Internet-of-Things will make cities integrated intelligent systems that give every citizen the ability to help make the city work better and improve energy efficiency,” explained Keynote Speaker Jerome Glenn, CEO of The Millennium Project at the 2012 Ljubljana Forum in Slovenia. “Cities are becoming too complex to be run by old management and information systems. Mayors will still be the orchestra leader, but they will be assisted by systems that make it easy for every citizen to play their part in finding and solving problems.” Jan Muehlfeit, Chairman of Europe Microsoft, stressed the need for cities to invest in attracting and keeping talent and also emphasized that “Cities will mainly compete on their ability to unlock human potential.”

More than 160 experts from 29 different countries came to the Ljubljana Castle to share how smart green technologies can improve the future of cities. Among them were six mayors, two vice-mayors, eight ambassadors, and a total of 40 speakers from governmental, academic, civil society, and private sectors.

“Cities have been around much longer than the nation-state and the EU,” said Blaz Golob, Chairman of the South-East European Node of The Millennium Project and organizer of the Ljubljana Forum. “Cities should not wait for nation-states or the EU for leadership in building a better future. We have good solutions now that should be implemented now.” To that end, Mr. Zoran Janković, mayor of Ljubljana, convened the conference of municipalities to share their best cases. The mayor told how his city was improving, saying, “We began with our future vision in Ljubljana 2035 report which is leading our way to become the Green Capital of Europe.” He also claimed that the “City of Ljubljana is the most beautify city in the word.”

Anton Rop, the General Manager and Vice President of the European Investment Bank said that investing into the construction sector is key to improving cities. Dr. Barbara Haering, Managing Partner eConcept & ETH University Zurich agreed, but added that investing in public transportation is also key. She added that “Zürich is the first city to set the goal of reducing their overall energy usage to no more than 2,000 watts per year by the year 2050 - without lowering their standard of living. This will require public education and strict regulations on constructing new buildings.”

Videos, presentations, and a forthcoming report will be available at http://www.ljubljanaforum.org.
The Ljubljana Forum on the Future of Cities: Energy Efficiency & Being Always On-line was organized by GFS GoForeSight Institute, Municipality of Ljubljana, in partnership with the Centre for eGovernance Development for South-East Europe.