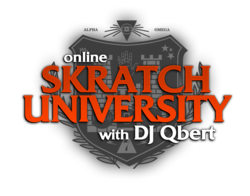 The "Real Instrument Skratching" tutorial series will be available to all students of Qbert Skratch University at no additional cost.

Qbert Skratch University has just released a series of online DJ lessons from Guest Professor Alexander Sonnenfeld on the subject of “Real Instrument Skratching”. This new series of DJ tutorials focuses on scratching with sounds from traditional instruments such as horns, guitar, bass and drums, and add to QSU's extensive online curriculum of DJ lessons that cater to turntablists of all skill levels. The "Real Instrument Skratching" tutorial series will be available to all students of Qbert Skratch University at no additional cost.

About Alexander Sonnenfeld
Guest Professor Alexander Sonnenfeld has been DJing since 1993 and has been releasing skratch tutorials on his YouTube channel since 2009. A native of Germany, Sonnenfeld has spent the past 14 years developing a system for notating skratches called “S-Notation” based on the principals of traditional music notation. Sonnenfeld has written a scientific music analysis of turntablism which is currently being reviewed by music scholars in Germany. The aim of his work is to legitimize turntable based music as an accepted musical art form that can be transcribed as accurately as classical music notation.

Sonnenfeld’s scratch tutorials serve as a contrast to the existing lessons taught by DJ Qbert that focus on breaking down common skratch patterns using traditional sounds for skratching. The “Real Instrument Skratching” series features tutorials on how to incorporate skratching using non-traditional samples (a saxophone for example) to create new possibilities in sound. The series is divided into four sections: Several Players (scratching with a group), Drumming (scratching drum patterns), Skratch Technics (applying scratch patterns), and Music Theory (transcribing scratch patterns). The tutorials are designed for all levels of skill and come complete with instrumental beats so students can practice along with the same music.

Anyone interested in signing up for online DJ lessons from Qbert Skatch University can do so from this link: http://www.qbertskratchuniversity.com/planselect