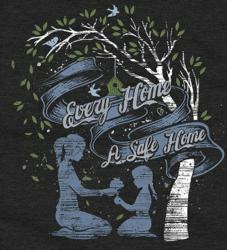 Every Home a Safe Home

To highlight the impact of domestic violence, NCADV has partnered with Charity52 during the second week of October to promote a limited edition t-shirt dedicated to raising awareness about domestic violence issues.

Since 1978 the NCADV has worked to support for the provision of community-based, non-violent alternatives, such as safe home and shelter programs, for battered women and their children. In addition they have worked to help shape public policy by sponsoring national public policy initiatives and federal legislation such as the Violence Against Women Act.

"We at NCADV are grateful to Charity52 for helping bring light to this critical issue. Through partnerships like this, we collectively gain strength in the stance to end violence in the home. If we each do our part, even in small ways, the louder our voice will become in saying no to abuse and stopping domestic violence in the home."

“The work that the National Coalition Against Domestic Violence does to help victims of domestic violence is invaluable”, said Alice Ruiz, Executive Director of Charity52. “It’s unfathomable that every 9 seconds in the US a woman is assaulted or beaten and yet it isn’t the lead story on the news every night. It is only through the tireless efforts of dedicated individuals like Rita Smith, director of the NCADV, that this issue receives the attention it deserves. We are grateful for the opportunity to partner with them during Domestic Violence Awareness month.”

In honor of Domestic Violence Awareness month, The White House issued a proclamation signed by President Obama highlighting challenges along with policy initiatives in place to combat it.

“While government must do its part, all Americans can play a role in ending domestic violence. Each of us can promote healthy relationships, speak out when we see injustice in our communities, stand with survivors we know, and change attitudes that perpetuate the cycle of abuse. “

According to the NCADV domestic violence is one of the most chronically underreported crimes. Only approximately one-quarter of all physical assaults, one-fifth of all rapes, and one-half of all stalkings perpetuated against females by intimate partners are reported to the police. Domestic violence also has a significant economic impact as well. The cost of intimate partner violence exceeds $5.8 billion each year, $4.1 billion of which is for direct medical and mental health services.

This week, Charity52 is working with the National Coalition Against Domestic Violence to raise awareness and bolster support for those impacted by domestic violence. Their limited edition “Every Home a Safe Home” t-shirt honors the mission of NCADV and those who seek to protect and empower battered women and children. "We are honored for the chance to work with NCADV", said Chris Scharff, president of Charity52. "At Charity52 our goal is to highlight non-profits that are making a significant impact and to help raise awareness and funding through our designs".

About the National Coalition Against Domestic Violence

NCADV serves as a national information and referral center for the general public, media, battered women and their children, allied and member agencies and organizations. NCADV has a strong track record of providing programs with information and technical assistance, and has promoted the development of innovative programs which address the special needs of all battered women, and the battered women's programs. The National Directory of Domestic Violence Programs--A Guide to Community Shelter, Safe Homes and Service Programs provides up-to-date information about domestic violence programs throughout the country, each with a comprehensive profile of services.

Charity52 is one of a new breed of socially conscious businesses who operate with community involvement as a core part of their business model. Based in Austin Texas, Charity52 pairs a new charity each week with a nationally renowned artist to create a new limited edition t-shirt design.