"Picking Petals" is the new EP from Aubrey Wood that follows her successful self-titled EP launched in 2010. Featuring five new and original songs, this effort features up and coming producer, Gia Sky. 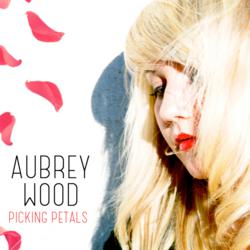 The five new, original tracks on “Picking Petals”, all written and performed by Aubrey, are an artistic departure from the first EP. With an upbeat flair that chronicle stories from Aubrey’s own life, the tracks feature lively production from up and coming producer, Gia Sky. Gia also performs and contributes on guitars, keyboards and a wealth of fresh innovative sounds.  “Gia brought a certain magic to these compositions that infused great energy and should connect with both current fans and new listeners”, said Aubrey.

Each composition on “Picking Petals” is a chapter outlining an emotional moment and an associated poignant lesson. “There is no greater source of material for storytelling than the challenges and difficult decisions that line the path toward adulthood”, said Aubrey.

In 2010, Aubrey released her first EP titled “Aubrey Wood” with all the music written and performed by Aubrey on vocals and acoustic guitar. A strong assembly of contributing performers included K.C. Porter, J.B. Eckl, and Paul Gonzales. Aubrey’s EP gained a broad following with hundreds of thousands of track plays online and a growing base of listeners on several music streaming sites.  Her popular single, “Heart”, has been a consistent presence at the top of the charts on MTV’s OurStage with the music video for the single reaching number one twice during 2012 and logging nearly 50,000 plays on YouTube.

In 2011, Aubrey was honored to create and dedicate the theme song for the rapidly expanding non-profit organization, Unified Theater™. “Fly”, was written and performed by Aubrey with the stellar support of Bella Blue and Trevor Jackson (From Disney’s “Let It Shine”) on background vocals.  Unified Theater puts a spotlight on ability by creating student-led theater groups that let young people with and without disabilities shine!