Stephanie Patsalis and the Hellenic American Family Foundation are on a mission to bring the Mediterranean diet and surrounding Greek culture into homes and kitchens across America. In partnership, HAFF and Patsalis have created Simply Greek by Stephanie, an educational video series on cooking and preparing meals from a Mediterranean diet to promote health and wellness. 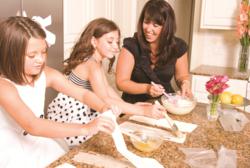 I want to bring the Mediterranean food brands and culture together in a way that highlights the best in Greek culture. I feel like sponsors can really capitalize on knowing that their products are well represented.

"Most people aren't cooking Greek tonight, they think Italian or Mexican, but they know their favorite Greek restaurant -- and yet the Mediterranean diet is the healthiest and freshest in the world," says Patsalis. "I want to bring the Mediterranean food brands and culture together in a way that highlights the best in Greek culture. I feel like sponsors can really capitalize on knowing that their products are well represented by someone who believes in the Mediterranean diet and has an equal passion for Greek American culture -- that's why Simply Greek is so near and dear to me, and why I want to bring it to the masses."

This is the first nationwide sponsorship campaign from the Hellenic American Family Foundation, an organization dedicated to promoting Greek American heritage, cultural awareness, and helping provide food for families in need. HAFF seeks sponsorship at three levels: Title, Presenting, and Supporting. Title Sponsors contribute to the film project with a $100,000 donation. A maximum of five Presenting Sponsors may contribute at the $50,000 level, and a limited number of Supporting Sponsors may contribute at the $25,000 level. The sponsored video footage will feature Title Sponsors along with logo placement, a sponsor mention, and potential product placement within the educational video. The Simply Greek series will be distributed through social media channels such as YouTube, Facebook, Twitter, and LinkedIn, along with mentions from the campaign's spokesperson Stephanie Patsalis. Title and Presenting Sponsors may be mentioned by Patsalis on television appearances, during radio interviews and print magazines. Presenting Sponsors receive sponsor mention, logo placement on the HAFF website and multi-channel media distribution through social media groups: YouTube, Facebook, Twitter, and LinkedIn. All sponsors will be featured as benefactors in the video production, and listed in communications through social media to email subscribers, social media channels, and at speaking events featuring Patsalis.

For more information about the project or to learn more about becoming a sponsor, contact the Hellenic American Family Foundation at (402) 212-0008.

About the Hellenic American Family Foundation:
The Hellenic American Family Foundation (HAFF) is a 501(c)(3) non-profit organization dedicated to helping families in need. Based in Omaha, Nebraska this National organization was founded in (2007) and its mission is to help families in unforeseen financial crisis due to natural disaster, medical bills, lost of jobs or other circumstances. Serving the United States and bridging the financial gap helping when families have nowhere to turn.

About Stephanie Patsalis:
Stephanie Patsalis delivers Mediterranean recipes, culinary techniques, and shares her passion for Greek food via high-quality videos, online social media channels, instructional classes, and at speaking events in cities across North America. Patsalis is the author of Greek Chic Cuisine and a champion for the movement of Greek cuisine into mainstream American culture. Her warm, authentic connection with audiences combined with world-class cooking talent, creates an atmosphere of encouragement and support for aspiring cooks from beginners to professionals.