Free Worldwide Distribution of the G6Handle, an Antibacterial Aid Apparatus 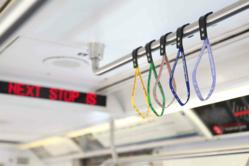 In an attempt to take precautionary steps against infectious and contagious diseases, G6Handle’s Founder, President, and CEO David Osorio has collaborated with health prevention advocate Taylor Bowker to announce the release of the G6HANDLE, a small, portable hand rail shield that attaches to poles and rails found in most transportation trains and buses worldwide.

David decided to team up with Taylor Bowker, an enthusiast of the g6handle, after sharing ideas on the G6HANDLE’s design, practicality, and most importantly how it can be ultimately given away for free. David had first met Taylor while they were both working on yachts. David commented, “I immediately wanted Taylor on board with this project because of his passion to contribute to society…his extensive knowledge in traction support will be sure to make the g6handle flawless and effective!”

David and Taylor have been relentlessly working on developing a special coating that actually repels germs, like bug spray. There are several agents that already exist that can actually help create a super anti germ barrier. The G6HANDLE is known to have incorporated a new intricate technology in its design that can apply conformal nanostructure coatings to various surfaces. Fine control of the chemistry at the material surface interface enables this new technology to bond onto the handle, which ultimately makes the handle repel germs and improve in its application and gripping power.

Dr. Julie Casani of HHS' division of Public Health Preparedness pointed out that “the average person touches his or her face 2,000 to 3,000 times a day. The face, where the mouth and nose are located for most of us, is a prime transmission spot for contagious diseases.” The article Travel Health Risks You Can -- and Can't – Avoid by Daniel J. DeNoon, explains that “We don't know what that passenger next to you is contributing to the air stream as he is inhaling and exhaling… people sitting next to you, and in the two rows in front of you and behind you. If one of these people has a cold, you are at risk.”

In recent days, David and Taylor have been meeting with transportation officials in New York City, Chicago, Washington D.C., San Francisco, as well as several international cities to discuss the free distribution of the G6HANDLE to all commuters. When asked what fueled the G6HANDLE initiative, David stated, “One day while actually using a clumsy handkerchief to hold a hand rail on the train, the idea for the G6HANDLE came to me like a vivid dream.” A tool everyone should have, thought David. After, many months dedicated to perfecting the G6HANDLE design, David and Taylor now are discussing and planning distribution solutions to provide the G6Handle at no cost to the public.

G6HANDLE representatives held an event on October 18, 2012 at Madison Square Garden at Penn Plaza to promote health awareness and held open discussions on the G6HANDLE’s design, effectiveness, and distribution efforts. Future events have not yet been confirmed.