Students at All Saints' Carden Academy Experience a Giant Inflatable Brain, Discover How to Care for Their Developing Brains, and Learn Seizure First Aid. 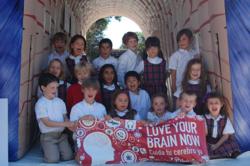 Since everyone has a brain and anyone can have a seizure at any time, all people can benefit from learning how to properly "love" their brains.

The Love Your Brain Now Bus Tour officially launched from the Rose Bowl on Sunday, October 28th during the 2012 Walk to End Epilepsy 5K & 1-Mile Stroll. The Bus will tour various locations in California to spread awareness about the brain and brain safety from now until December 7th.

On October 29th, the second full day of the Tour, the Love Your Brain Now Bus made its first school campus visit to educate the students and faculty of All Saints’ Carden Academy in Riverside, California. Students learned and interacted about ways to care for the brain, such as wearing a helmet while riding a bicycle, getting good sleep, eating nutritious food, exercising, and more.

“Remember to care for your brain, because it is the only one you will ever get!” said Susan Pietsch-Escueta, a member of the Tour Team, during the presentations.

Since everyone has a brain and anyone can have a seizure at any time, all people can benefit from learning how to properly "love" their brains. The Epilepsy Foundation of Greater Los Angeles is sponsoring the Love Your Brain Now Bus Tour with the sole purpose of promoting care for the brain and presenting seizures caused by epilepsy, a common brain disorder, as an example of why it is so critical to care for the brain. It is estimated that one in ten people will have a seizure sometime during their life.

The Love Your Brain Now Bus Tour specifically spreads awareness about the importance of preventing head injury, one of the leading causes of epilepsy and seizures. The Tour also reminds those living with epilepsy about the importance of caring for the brain to reduce seizures and the impact of seizures. Finally, the Tour teaches everyone how to recognize seizures and what to do if someone around them has a seizure.

“The entire staff at All Saints' Carden Academy was so excited to have the Love Your Brain Now Bus and the “Big Brain” visit our school! We were honored to be the very first stop on the six-week tour,” said Janis Bengtson, the Head of School. “We learned so much from the interactive presentation.”

For more information about the Tour and its major stops, please visit http://www.LoveYourBrainNow.org.

The Tour is led by the Epilepsy Foundation of Greater Los Angeles and Epilepsy California. Use of the bus was generously donated by Shannon Abdulwahab and Andy Meyers. Lead Sponsors include Creative Inflatables of PDG, Eisai Inc., John Meyer of the johnmeyerproject.com, Stefani Rose and Reaching Out, and Matt Mugglebee, the RV Butler. Guide Sponsors include Variety, Doubletree Hotel, Michael Jones, MD, and the Steve Tisch Family Foundation. Other Friends include the Fortier Family, WAT-AAH!, Talk About It!, the Epilepsy Alliance of Orange County and various teams at the Walk to End Epilepsy.

Without warning, seizures can happen to anyone at any age. When a person has two or more unprovoked seizures, they have epilepsy. Seizures do not all look the same and, according to the International League Against Epilepsy, there are currently more than 25 different recognized epilepsy syndromes affecting almost 3 million people in the U.S. and about 65 million people worldwide. Someone is diagnosed with epilepsy every four minutes and, this year alone, almost 200,000 people in our country will be diagnosed. To date, there are no known cures.

ABOUT THE EPILEPSY FOUNDATION OF GREATER LOS ANGELES

Established in 1957 as a 501(c)3 charitable organization, the Epilepsy Foundation of Greater Los Angeles is leading the fight to END EPILEPSY® and the burden of seizures. Our fundraising and community efforts support care, advocacy and education, today, while investing in research and hope for tomorrow. Visit us online at EndEpilepsy.org.