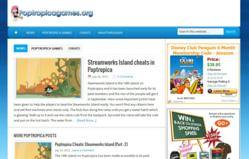 PoptropicaGames.org offers walkthroughs, cheats and game play tips for such new islands to allow players to be more acquainted with what's ahead.

The present era of online gaming is characterized by titles that often involve violence and mature themes. Games that depict war, fighting and atrocities are the most common, which is either a necessary reflection of the present realities.

However even amid the prevalence of "violent" gaming, some titles are meant to be played with the good old idea of what competition is all about. Poptropica, a series of role-playing games which players – mostly kids and pre-teens – play online, is one such example.

Offering fun for the whole family, Poptropica is a brainchild of the Family Education Network, which is owned by the same developer that operates the kid-friendly site FunBrain.com.

Not surprisingly, the title is relatively enjoying praises not only from avid players but also from parents and the media. It is enjoyed by more than 75 million registered users, half of whom are between 15- and 25-year-olds.

PoptropicaGames.org is a website that is dedicated to featuring the virtual gaming world where kids travel various islands – known as quests – to complete tasks or missions. Filled with interesting characters, villains and other gaming elements, Poptropica games are characterized by head-to-head competition and safe communication among players.

Poptropica games normally require players solves puzzles and search for essential items. Interaction with "citizens" in the islands is also necessary. In the later part of the games, where more islands or quests need to be traveled, players have to participate in different game events.

PoptropicaGames.org offers walkthroughs, cheats and game play tips for such new islands to allow players to be more acquainted with what's ahead. Important points and hints for dealing with robots and machines are also provided by the website to ensure a successful finish in each of the quests of the Poptropica games.

PoptropicaGames.org is provides the latest information and news regarding the Poptropica game. The website also aims to assist players in improving their game play with walkthroughs and cheats.