A wolf fights to stay alive in a shattered world in C.R. Penny’s new book, ‘Shadow.’ 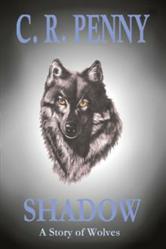 renewed sense of self and the unique place we all have in existence, a new look at family and its meanings and a moment to reflect on a world that is slowly divorcing itself from the natural world.

C.R. Penny’s new book “Shadow: A Story of Wolves” (published by Trafford Publishing) shows the story of a pampered wolf’s fight to stay alive in a post-apocalyptic future.

Without warning, an asteroid smashes into earth with the energy of 2,000,000 hydrogen bombs. In an instant, over half of the world’s population has been annihilated; the earth has been wiped clean. Only a few lucky souls survived the initial blast that has housed the sky in darkness. Slowly, black snow begins to fall; a sign seen as the beginning of the great famine.

The year is 2012. A lone plains wolf, Shadow, has lived the life of luxury in a zoo – his every want has always been catered. Shadow is near death when a human happens upon him. Set free, he follows his savior and her dog, Champ, as they travel the region looking for food. One day tragedy strikes and leaves Champ and Shadow alone. As the two continue to journey for food, they end up high in the mountains were they discover a small pack of wolves living on the carcasses buried under the soot-laden snow. As the world begins anew, Shadow must also begin a new life with a family.

An excerpt from “Shadow”:

“Those that knew in that fleeting moment, what it was and its portent had no time to think on it. At 210,000 kph, with the accumulated energy of 2 million hydrogen bombs it blasted through the atmosphere in a second, striking almost centrally on the continent of Africa. Those that heard the tearing sound as the plasma disrupted the atmosphere had no time to look up to see what it might be, those already staring at the sky saw the eye-blink it made as it struck the first atoms of the Earth’s atmosphere.”

It is the authors hope that readers will get a “renewed sense of self and the unique place we all have in existence, a new look at family and its meanings and a moment to reflect on a world that is slowly divorcing itself from the natural world.”