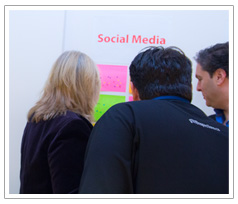 Topic selection at the Whitchurch-Stouffville Un-Conference

I met twice the number of people I would normally meet at a conference, and it seemed to happen effortlessly. - Stuart Morley

The business ecosystem is changing rapidly, making it difficult for business owners to keep pace. CanadaOne.com, along with seven local partners and fourteen regional partners, successfully piloted a new approach to business networking that also addressed these challenges.

The solution was to draw on the unconference format, which has been popular in technology, education and non-profit sectors for some time, but adjust the model to enhance the concept of business networking and knowledge sharing at a three-quarters day event that took place in Whitchurch-Stouffville, Ontario on October 15.

The results demonstrate that business networking events can be greatly enhanced by using elements of the unconference format, with a few unique additions.

One of those additions at the Whitchurch-Stouffville Un-Conference event was decision to bring business leaders who would normally be invited to speak at a traditional conference “out from behind the podium” to participate fully in the event.

“At a typical conference attendees listen to the speakers, then maybe get a minute to exchange business cards with them afterwards,” said Julie King, co-founder and editor of CanadaOne.com. “We decide to flip that around, to bring our experts out from behind the podium and to put our champions forward as leaders for the day.”

The nine champions, which included a well-known business journalist, leading privacy and security expert, leadership coach and a data analytics expert who left the lead position running IBM Canada’s data warehousing and analytic department to start his own company, had a role both leading up to and during the event.

“The Un-Conference stimulated in depth, focused conversations and allowed the talent in our community to shine,” said Kathleen Redmond, founder of the Centre for Character Leadership who was one of the event champions. “Provocative, practical and edgy way to dive quickly into what is on our minds and collaborate for solutions and results.”

The Whitchurch-Stouffville Un-Conference had three other differentiators from the traditional unconference to add value around the $30 ticket price: free gift certificates to stimulate business in the downtown, a structured networking component and a gamestorming lunch.

“One goal for this event was to bring people from around the region into our downtown,” said Anna Rose, the downtown coordinator with the Town of Whitchurch-Stouffville, a local event partner. “To do that each attendee was given $10 in gift certificates that could be used anywhere in the downtown.”

The structured networking, which took place while organizers tabulated votes and roughed in the agenda, was extremely popular. Yet the best networking took place throughout the day in the breakout sessions.

“The Unconference was very rewarding for me professionally, as I learn more from peer discussions than listening to guest speakers,” said Stuart Morley, a managing partner with the MBO Group. “I met twice the number of people I would normally meet at a conference, and it seemed to happen effortlessly. I have already had follow up discussions with several people I met at the Unconference.”

The most dynamic portion of the day was the gamestorming lunch, where a champion at each table led their group through the task of drawing a character for a selected business that exemplified that company’s unique selling proposition. The group also needed to select a colour scheme and theme song and then presented their final work to the entire group.

“I have occasionally seen some quirky things at business conferences, but this is the first time I’ve seen spontaneous singing, dancing, and even a crazy chicken call that went with the character created for a local farmer who attended,” said King.

The strong partnerships and collaboration was also essential to the success of the event.

It was also an N6 bridge event, which includes as partners the Regional Municipality of York, Ontario Ministry of Economic Development and Innovation, York University, the Business Knowledge Initiative (BKi), as well all of the economic development offices and Chambers of Commerce for the six communities in northern York Region.

For business organizations looking for new ways to engage smaller companies and provide real value, the Whitchurch-Stouffville Un-Conference experience demonstrates that a modified unconference format may just be the best way to approach business networking events in today’s business ecosystem. CanadaOne.com is thrilled to have been involved in pioneering this event.