Seventeen-year-old Alexandra Gritta speaks out against horse slaughter and works to raise public support and federal protection for American horses. 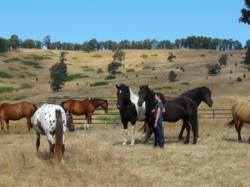 ...I strongly oppose the industrial slaughter of American horses on either foreign or domestic soil.

Alexandra Gritta, seventeen-year-old author and President of Charity Book Series®, Inc., a 501(c)3 charitable nonprofit corporation, donates the profit from her children's book, Mystery at Silver Key Stables, to organizations that rescue and provide safe habitats for horses. Many of the horses her charitable donations ultimately help have narrowly escaped slaughter, an issue Gritta feels very strongly about: "Currently there are no laws to prevent killer buyers from purchasing our American horses at auctions and transporting them across U.S. borders to Canada and Mexico to be brutally slaughtered. This needs to change."

Gritta strongly opposes horse slaughter and supports the American Horse Slaughter Prevention Act S.1176/H.R. 2966, pending legislation which would amend the current Horse Protection Act to prohibit the transporting, purchasing, selling or donation of horses and other equines to be slaughtered, and ban the opening of horse slaughter plants for human consumption in the U.S. “Horses are bred in the United States as sport and companion animals and deserve the same protection from cruelty, abuse and physical slaughter that other companion animals have. I decided to speak out because I strongly oppose the industrial slaughter of American horses on either foreign or domestic soil.”

According to recent ASPCA research, nearly 80% of Americans oppose horse slaughter for human consumption. Gritta hopes those Americans will take immediate action and ask their State representative and senators to protect U.S. horses. Gritta: "Please contact your legislators and ask them to support the American Horse Slaughter Prevention Act. I hope you will join with me and the millions of other Americans who oppose the commercial slaughter of our horses." Click here to find contact information for elected officials from your state.

Alexandra Gritta is the author of children's book, "Mystery at Silver Key Stables," nominated for the Henry Bergh Children's Book Award, available on Amazon.com. She was finalist with honorable mention for "2010 Humane Teen of the Year," by the Humane Society of the U.S., in recognition for her charitable work on behalf of horses. Gritta's documentary, "Premarin® and Horse Slaughter--the Ugly Truth behind the Label," received Honorable Mention as a Work of Merit in the 2012 Fresh Film NW division of the Northwest Filmmakers Festival. In her free time, she enjoys volunteering at the Duchess Sanctuary in Oakland, Oregon, helping to care for the many horses there that were rescued from slaughter, neglect, and abuse. Her video supporting the American Horse Slaughter Prevention Act can be viewed at http://www.youtube.com/watch?v=joW8mycKFno.

Alexandra Gritta (left) with Duchess Sanctuary's ranch manager, Jennifer Kunz. Most of the horses at the sanctuary were rescued from slaughter.(Photo credit: Charity Book Series, Inc.)