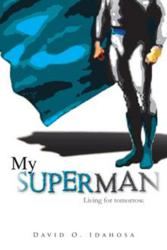 ...and by doing this, we will be able to live together in peace and harmony and make the planet earth the heaven that it is here on earth that many prophets have long spoke of.

In his new book, “My Superman: Living for Tomorrow” (published by Trafford Publishing), David O. Idahosa tells the story of David, a young boy growing up in a country torn in a civil war, struggling to achieve his dream of becoming a writer.

David was living a life of crime, finding himself in incarcerated times. Despite his circumstances, which almost stole his life away, he would not relinquish his dream of becoming a writer. After seeing the possibility of his dream slipping away, he took his life into his own hands and made a change to better his life.

It was then that he then decided to set on a formidable journey of life, traveling to Europe by land, passing through the Sahara desert, to Morocco, and later to Spain. Reaching Spain, he proceeded farther on his adventurous journey that altered his life and dream – only to discover the tragedies that later befell him where he was incarcerated by unending miseries, seeing his life in peril and his dreams turning into nightmares. Soon however, David became less preoccupied with his own problems as he looked to the three major problems engulfing the world – hunger, war and terrorism.

David found politics more fascinating, and when he tried to ascertain the facts about it, he grasped that it was greed, power, and lust that were written in their agendas. It was disturbing his faith and beliefs in humanity. He thought he could see how men chose to forbid love and peace, to embrace enmities and conflicts; he said he could see that if men cannot make a sacrifice to love their neighbors, they will find themselves paying prices for destroying each other.

“What I would want readers to take away from my writing is that we should make love be the religion we worship,” Idahosa explains, “and by doing this, we will be able to live together in peace and harmony and make the planet earth the heaven that it is here on earth that many prophets have long spoke of.”

About the Author
David O. Idahosa was born and bred in Africa, and now lives in Spain. He has traveled and lived in many places in Europe and like his character David, dreamed of becoming a writer.