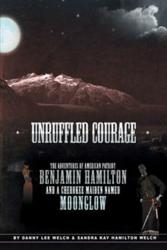 Anyone reading the book will find something to enjoy

In their new book “Unruffled Courage: The Adventures of American Patriot Benjamin Hamilton and a Cherokee Maiden Named Moonglow” (published by AuthorHouse), authors Sandra Hamilton Welch and Danny L Welch tell the story of the life of one of Sandra’s ancestors.

Benjamin S. Hamilton is a mountain man-turned-soldier fighting in the American Revolution. He narrowly survives the Battle of Kings Mountain, but is later taken captive by a renegade band of Cherokee braves. Benjamin is taken back to the Cherokee village, where he soon befriends a woman named Moonglow. He promises to marry her, and the two plan their escape, fleeing just before Benjamin is scheduled to execution by running the gauntlet. The couple, now free and together, build a new life together, building a family of 10 children and living in a log cabin deep in the hills of eastern Kentucky.

An excerpt from “Unruffled Courage”:

“Ben sat motionless, watching the outline of someone walking toward him on the same narrow footpath he himself had taken earlier. Closer the person came. Closer. Ben could now see it wasn’t Joe, but rather an Indian, small in stature, and carrying a basket. Fearing detection, Ben unsheathed his tomahawk and hunkered lower to the ground, opening his mouth slightly to keep his breathing inaudible. He remained absolutely still, becoming one with the fauna and flora. The forest gave the appearance of having returned to its primeval splendor with the waterfall as its main focal point.”

Danny and Sandra wrote the book to give readers a story about true courage in the face of great adversity, as well as a glimpse into American history. “The novel is a well-blended mix of history, adventure, suspense and romance,” says Danny. “Anyone reading the book will find something to enjoy.”

About the Author
Sandra Hamilton Welch, a retired secondary language arts teacher, spent her career coaching students in the rudiments of writing. She holds a bachelor’s degree from Morehead State University (Ky.) and a master’s degree from Ohio University.

Danny L Welch, a retired telecommunications technician, is an avid storyteller both verbally and musically.

Both were born and raised in the hills of northeastern Kentucky, and they now reside in the Hocking Hills Region of southeastern Ohio.

AuthorHouse, an Author Solutions, Inc. self-publishing imprint, is a leading provider of book publishing, marketing, and bookselling services for authors around the globe and offers the industry’s only suite of Hollywood book-to-film services. Committed to providing the highest level of customer service, AuthorHouse assigns each author personal publishing and marketing consultants who provide guidance throughout the process. Headquartered in Bloomington, Indiana, AuthorHouse celebrated 15 years of service to authors in Sept. 2011.For more information or to publish a book visit authorhouse.com or call 1-888-519-5121. For the latest, follow @authorhouse on Twitter.
###