Nourishmat, developed by Earth Starter, LLC, is an innovative gardening product geared towards empowering people to grow their own food. The patented design and construction of Nourishmat takes the guess work out of gardening. The Nourishmat, which was officially launched on Earth Day 2012, features built-in irrigation, custom-made seed balls and crop-specific spacing guides printed on a weatherproof weed barrier. The product serves as a tool to help busy humans supplement their diets with healthy, homegrown produce and to promote food growing in their communities. 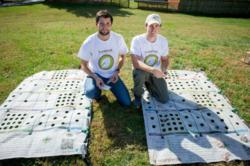 It basically takes the guesswork out of gardening

If inspiring others to utter the phrase “Now why didn’t I think of that?” elevates a simple idea to the level of great invention, then recent University of Maryland, College Park graduates John-Randall Gorby and Philip-Michael Weiner are definitely on to something.

The two friends and entrepreneurs have developed a product they claim can turn any thumb green without actually dirtying any hands.

It’s called the Nourishmat: a 6 feet by 4 feet UV treated polypropylene mat with pre-cut holes, labels and a grid telling would-be gardeners exactly what, where and how far apart to plant. The plastic barrier cuts down on weeds and is outfitted with a drip irrigation system that works by simply plugging in a hose.

“It basically takes the guesswork out of gardening,” explains Weiner, who received his B.A. in economics from UMD in 2011.

Gorby’s and Weiner’s mission is to give everyone – regardless of age, income, location, or gardening experience – the ability to easily produce their own fresh vegetables and herbs. As if the mat itself didn't make that concept easy enough, the duo also manufactures seed balls to accompany their product. The balls contain non-GMO seeds, clay, natural earth worm castings, chili powder and other nutrients to prevent the seeds from drying out in the sun, getting eaten by birds or blowing away.

The best part: “There’s no digging. You just push the balls into the ground,” said Gorby, who earned a degree in Environmental Science and Technology in 2010 from the College of Agriculture and Natural Resources.

Gorby had already developed the basic idea that would become the Nourishmat prior to meeting Weiner in a Calculus class during his senior year. The two quickly bonded over the fact that they both have hyphenated first names, grew up in families where gardening was a regular weekend activity and keep “invention notebooks” in which to jot down ideas for products or companies when inspiration strikes.

“I’ve always wanted to stick with dirt,” said Gorby. “To be able to build something related to agriculture and environmental technology, I mean that’s exactly what I went to school for. I feel like I’m using my degree to its full advantage and a lot of people can’t say that.”

When Weiner first learned about his eventual partner’s plan, he admits he wasn't sure how marketable the product would be. That is, until he took a course in the Department of Agricultural and Resource Economics (AREC) called Farm Management and Sustainable Food Production taught by Extension specialist Dale Johnson.

“That’s when I realized we had to make this happen,” Weiner said. “I just think it’s sad most students graduate from here (UMD) without knowing how to grow their own food.”

The two felt so strongly about their project’s potential, they eventually decided to fund the product development phase on their own. Currently, they have 30 test mats stationed in different areas of the country – Maryland, West Virginia, Ohio, North Carolina, California – as well as in the Virgin Islands.

Gorby and Weiner also reached out to the University of Maryland Extension’s Grow It Eat It program for advice and suggestions on how to market the Nourishmat. Right now, they are producing and selling a limited number of the mats but plan to buy warehouse space and expand production this spring.

In the meantime, events like one held recently at the Sheridan Street Community Garden in Prince George’s County provide Gorby and Weiner with an opportunity to explain their product on a personal level. The Nourishmat attracts attention wherever it’s displayed and constantly elicits the question with which its creators have become quite familiar: “Why didn’t I think of that?”

Both Gorby and Weiner are hoping they can market the Nourishmat as an food growing education tool and are working on developing a curriculum that can accompany it to be used in schools. The two have already teamed up with the Capital Area Food Bank and are sending 100 mats to Honduras to help teach children and adults there how to grow their own food.

The Nourishmat currently sells for $70 and comes with 96 seed balls for planting 19 different varieties of herbs and vegetables such as onions, spinach, carrots, red pepper, basil, dill and parsley. For more information on the Nourismat, visit http://www.nourishmatbeta.com.