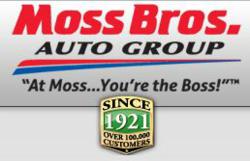 "November is the beginning of our annual giving campaign, where we really bring meaning to our commitment to supporting the wonderful people in our community," explained
Glenn Moss, owner of Moss Bros. Auto Group.

Moss Bros. Auto Group, a prominent family owned chain of California automobile dealerships, promotes the spirit of the holidays through targeted giving campaigns at its numerous auto dealerships. While the economy has begun showing signs of recovery, there are still many individuals who need extra assistance during the holidays, which typically is bolstered through the efforts of local businesses. Moss Bros. hosts an annual Tis the Season for Giving campaign that includes food drives, toy drives and blood drives. Customers, employees and vendors are all invited to participate in this effort that supports the local community starting in November. Click on the link for information on riverside used cars.

Glenn Moss, owner of Moss Bros. Auto Group, explained the company’s annual charitable drives. “November is the beginning of our annual giving campaign, where we really bring meaning to our commitment to supporting the wonderful people in our community. We start this with a food drive for Second Harvest Food Bank, where we collect more than 2000 pounds of food each year.” He added, “After Thanksgiving, we begin our toy drive for Toys for Tots, and we’ll also host blood drives right before Christmas.” Click on the link for information on car dealerships in Riverside CA.

About Moss Bros. Auto Group – The Moss family has a long history in the automobile industry, spanning back to 1921. Today, the family owns and operates a group of dealerships across California, offering sales and service with a focus on superior customer service. The company owns the entire Moreno Valley Auto Mall, which includes Moss Bros. Chevrolet, Moss Bros. Buick GMC and Toyota, Honda, and Chrysler Jeep Dodge franchises. Moss Bros. Auto Group leads several annual community giving events with its Tis the Season for Giving campaign, which beings each November. For more information or to participate/donate, visit http://www.mossbrosautogroup.com.