New children’s book celebrates magic, loyalty between a boy and his dog 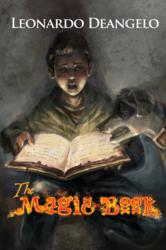 The magic, imagination and quests of these two will speak to any child who loves their pet and understands what it’s like to feel like the world is just one big adventure waiting to happen.

In his children’s adventure epic, “The Magic Book,” Leonardo Deangelo reintroduces readers to Sam and his faithful dog, Spot. The two set off a new adventure when they discover a magic book that whisks them away to the mystical land of Notts.

Deangelo wrote the book to help showcase the love between a young child and his pet, something to which he could personally attest.

“The relationship that Sam has with Spot is much like the relationship that I had with my own dogs, Spot and Shadow,” DeAngelo says. “The magic, imagination and quests of these two will speak to any child who loves their pet and understands what it’s like to feel like the world is just one big adventure waiting to happen.”

The book follows Sam and Spot as they seek a way out of their newest misadventure. Unlike their other exploits, this one threatens their loyalty and trust like never before. The goal, Deangelo says, is to help children realize that the power of friendship and loyalty is its own kind of magic.

“Children should grow with stories like this to help their minds and imagination to grow,” Deangelo says. “Magic lives first in the mind and then it manifests around us.”

For more information, visit Amazon, Barnes and Noble and AuthorHouse

About the author
Leonardo Deangelo was born in Italy and went to Australia when he was six years old. He was a soldier, artist, sculptor, designer, shop owner, movie director, art tutor, and writer. He wrote and published his first children’s book in Great Britain in 1984. He has been writing ever since and enjoys sharing his creative mind with all who are interested.