A $600,000 National Science Foundation grant will help Bucknell professors address what they call a real problem in engineering education across the country: the misunderstanding of basic concepts. 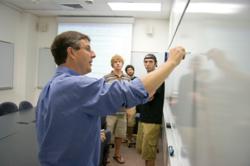 "The definitions of those words aren't supposed to be on the tip of your tongue, but for engineering students, they should be. In engineering, it's critically important to understand those concepts."

"Temperature is a word you've used your whole life, but if you sit down with a group of students, and I just did this, if you sit down and say, 'Tell me in plain language what temperature is,' nobody can do it. It's the same thing with the word energy," Prince said. "The definitions of those words aren't supposed to be on the tip of your tongue, but for engineering students, they should be. In engineering, it's critically important to understand those concepts."

Over the past few years, Prince, along with Bucknell colleagues Margot Vigeant, associate professor of chemical engineering, and Katharyn Nottis, professor of education, have been awarded grants from the National Science Foundation (NSF) to assess students' misunderstanding of these and similar, seemingly simple concepts key to engineering education. They've worked to develop experiments and activities to make those concepts more easily understandable.

"They work," Nottis said. "We know from our assessments that students have shown great conceptual change. The students in the data we have clearly score higher, significantly higher, compared to those who haven't been exposed to those activities."

"As we talk to our colleagues at other institutions, and say 'Look at these great experiments we have. We know they're really effective, don't you want to do them in your class?' They say, 'Well wait a minute — I don't have a lab. I'm teaching at a large state school and we don't have a two- or three-hour lab in the afternoon, so I don't have time to do your experiments.' Or they say, 'Maybe the experiment requires little inexpensive pieces of metal and a sunlamp, but I have 150 students in class, so a $20 experiment at Bucknell is suddenly thousands of dollars where I teach, and I don't have thousands of dollars to spend," Vigeant explained.

"The whole idea of this program is wide-spread use," Prince said. "The biggest barrier right now in improving engineering education, and STEM (science, technology, engineering and mathematics) education in general, is not that we don't know enough about what works, it's that we don't know how to get faculty to use the tools we know do work."

So Prince, Vigeant and Nottis, along with Milo Koretsky, a professor of chemical engineering at Oregon State University, want to change the experiments they developed to make them even easier, simpler and less expensive for others to adopt. They're considering alternatives such as computer simulations, which could be assigned as homework, or one large demonstration as opposed to breaking into smaller groups. Perhaps even talking through the experiments without actually doing them will work to change students' misunderstandings of certain concepts.

"Our big problem is we don't know if those types of changes will negatively impact the effectiveness of the activities," Vigeant said. "Will they still work?"

It's a question the NSF wants answered too. It recently awarded the four professors a $600,000 grant to develop and test alternatives to their exercises.

They'll begin by formulating specific instructions on how to carry out the new teaching methods, and then share them with a smaller group of faculty at various institutions who have agreed to use the exercises in their classes. After gathering enough data to assess their effectiveness, which will likely involve a good deal of tweaking, the researchers hope to share the methods with a broad teaching audience.

"The exciting part of this is we're doing it in a way that matters, doing it in a way that's not just going to benefit one group of students in one classroom at one university," Prince said. "If we show these particular approaches work in chemical engineering, there's no reason they won't work in any STEM field. We really have the potential to impact lots and lots of people across the country."