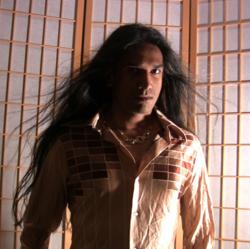 It is a great feeling to be recognized among so many talented artists and individuals who have shaped musical history for more than five decades and I look forward to the places this consideration will take me.

“I am honored to be considered by such a reputable and noteworthy institution and award like the Grammys in their 55th year,” said Bhatt. “It is a great feeling to be recognized among so many talented artists and individuals who have shaped musical history for more than five decades and I look forward to the places this consideration will take me.”

GRAMMY considerees and nominees go through a rigorous process with submitted entries which are then screened for eligibility and category placement. The 55th Annual GRAMMY Awards are slated for February 10, 2012 at the Staples Center in Los Angeles.
Updates of Anand Bhatt at the awards will be posted on twitter: @anandbhatt and on http://www.facebook.com/anandbhattrock

About The GRAMMY Recording Academy

Established in 1957, The Recording Academy is an organization of musicians, songwriters, producers, engineers and recording professionals that is dedicated to improving the cultural condition and quality of life for music and its makers. Internationally known for the GRAMMY Awards — the preeminent peer-recognized award for musical excellence and the most credible brand in music — The Recording Academy is responsible for groundbreaking professional development, cultural enrichment, advocacy, education and human services programs. The Academy continues to focus on its mission of recognizing musical excellence, advocating for the well-being of music makers and ensuring music remains an indelible part of our culture.

About The GRAMMY Awards

The recording industry's most prestigious award, the GRAMMY, is presented annually by The Recording Academy. A GRAMMY is awarded by The Recording Academy's voting membership to honor excellence in the recording arts and sciences. It is truly a peer honor, awarded by and to artists and technical professionals for artistic or technical achievement, not sales or chart positions. The annual GRAMMY Awards presentation brings together thousands of creative and technical professionals in the recording industry from all over the world.

Celebrity musician Anand Bhatt (http://www.sonicwaveintl.com/anand) is recognized as both a solo artist and once front man of hardcore band Anand Clique. Not only is Bhatt an internationally recognized musician, he is also a major television and movie personality. Bhatt has recently been busy with a successful year full of endorsements and global travel, hitting international radio charts and various interviews on India West, The Celebrity Café, Univision’s Agenda Washington, and Telemundo’s Buenos Dias Miami. His philanthropy is also exemplified by his commitment to The David Lynch Foundation and Simply Smiles, a non-for-profit organization dedicated to providing bright futures for impoverished children.