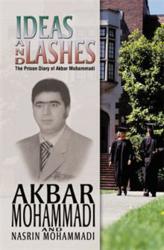 Ideas and Lashes is the prison diary of Akbar Mohammadi. His death in Tehran’s Evin prison was a cause célèbre of the July 1999 Iran student protests. Iran has just recently been rocked by the June 2009 election revolt. Mohammadi’s diary is a timely (and necessarily brutal) reminder for the world to remember the popular figures of that recent revolt. The late Mohammadi himself made a sacrifice so that the protests of 1999 would be remembered. Both events were distinguished by a popular uprising and romantic failure. This last is especially brutal in memory – it has made literature such as that of poet/painter Sohrab Sepehri (who died of suicide of 1980) and Mohammadi’s himself. It is the literature of the brave, torture and intimidation are the worst kinds of motivation with which the most memorable literature is written.

Iran’s Islamic Revolutionary Government has not endeared itself to the world with its fanaticism. Mohammadi cries out from the grave – and the truth is made all the more compelling: for the good Iranian citizens who criticize their government, the Ayatollahs have created Jahannam, the hell of Islamic believers. Mohammadi was neither heretical nor especially violent. The violence was begotten by Iran’s security apparatus. Apparently, Iran’s case has been no different from authoritarian regimes throughout history, especially in the 20th century. Mohammadi’s diary, in this sense, merely chronicles the methods native to the Iranian form of torturing political prisoners.

Lest the world forget, Iran is one of the most important (if not the most important) centers of Islamic philosophy. The revolution that replaced the monarchy government of Shah Rezah Pahlavi ushered in a new era of hate in Islam. True believers of Islam are nothing if not fastidious in ridding themselves of any form of apostasy, especially an apostasy of luxury. But when will the violence end? Will it give rise to a calmer Islam? Will the Jihad finally come to its apotheosis – the non-physical, wholly spiritual Jihad? Akbar Mohammadi’s diary is a message to all believers that perhaps that time has come. Islamic and Iranian history has no lack of heroes who overthrew despots or who were tortured and died for trying. This is Mohammadi’s proud Islamic lineage.

About the Author
Akbar Mohammadi (1972 – July 30, 2006) was an Iranian student at Tehran University involved in the 18th of Tir crisis, also known as the July 1999 Iran student protests, Iran's biggest pro-democracy demonstrations since the 1979 Islamic Revolution. As his sister Nasrin Mohammadi (co-author) A True Advocate of Democracy in Iran, explains that how he was killed at Evin prison, causing an international outcry.