Wohlsen Construction Company is ranked among the top 100 green contractors in the United States, according to Engineering News-Record’s (ENR) Top Green Contractors List. 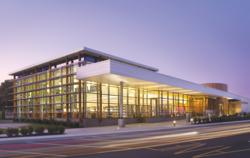 Wohlsen Construction Company is ranked among the top 100 green contractors in the United States, according to Engineering News- Record’s (ENR) Top Green Contractors List released last month. The listing ranks both publicly- and privately-held contractors, based on construction contracting-specific revenue on projects registered or certified by third-party organizations following environmental, energy-savings, or sustainability standards. Such groups include the U.S. Green Building Council (USGBC) and the Green Build Initiative.

In a survey conducted by ENR, Wohlsen reported more than 36% of its total revenue in 2011 was generated from green building and sustainable practices in multiple markets including: retail/commercial office, government, education, health care and retirement. All told, Wohlsen saw a 25% increase in the number of construction projects in its four-state market of Pennsylvania, Delaware, Maryland and New Jersey.

“As a company, we are committed to the advancement, education and success of sustainable practices throughout the construction process,” says Gary Langmuir, President and CEO of Wohlsen Construction. “We are encouraged by the number of green and renewable energy projects, as well as increased interest toward the net-zero and LEED® certification.”

Wohlsen Construction Company, a Green Plus Certified company, was founded in 1890 and is one of the leading merit shop construction firms in the Mid-Atlantic States. With 21 accredited LEED® AP and Green Associates and 35 staff members with Green Advantage® Certification, Wohlsen is an active member of the Green Building Association of Central PA, Delaware Valley Green Building Council, US Green Building Counsel and ABC chapters in Delaware, New Jersey and Eastern PA.

Wohlsen has received its Green Plus Certification from the Green Plus Institute for Sustainable Development and was named the North America Green Plus Medium-Sized Business of the year in 2010.