41st Annual Peace Over Violence Humanitarian Awards Dinner Wraps Up October’s “Domestic Violence Awareness Month” with a Star Studded Fundraising Gala Honoring Organizations and Individuals Who Have Made a Difference in the Struggle to Eliminate Violence Against Women, Men, Youth and Children 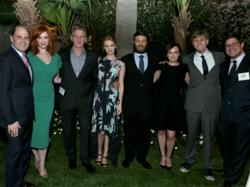 Peace Over Violence is a social service non-profit agency dedicated to the elimination of sexual and domestic violence and all forms of interpersonal violence. Established in 1971 as the “Los Angeles Commission on Assaults Against Women” (LACAAW) the agency provides crisis intervention services, violence prevention education to area youth, and case management and counseling services to survivors of violence.

The evening honored the following individuals and corporations who have made a difference in the struggle to eliminate violence against women, men, youth and children:

The evening, raised over $300,000 for the non-profit agency. Since its inception in 1971 as the Los Angeles Commission on Assaults Against Women, Peace Over Violence has grown from a volunteer crisis hotline to an agency with a sizeable staff and an excellent reputation. It is widely recognized as a social partner in issues of violence prevention, health, education, human rights, and civil society. The organization, offers a wide range of programs which encompass ‘one on one’ intervention services and ‘one on one’ violence prevention services.

More information on Peace Over Violence is available at http://www.peaceoverviolence.org.