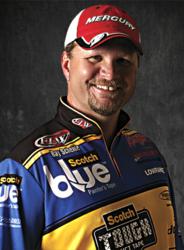 FLW announced today that 3M, a long-term sponsor of the world’s largest tournament-fishing organization, will return as a sponsor in 2013. Financial terms of the deal were not released.

The 3M Scotch Blue Tape and Peltor will receive exposure across all of FLW’s platforms, including its tournaments and Expos, multiple websites, FLW Bass Fishing magazine and the “FLW” television show on NBC Sports Network. "FLW" is broadcast Sundays in high-definition (HD) to more than 559 million households worldwide, making it the most widely distributed weekly outdoors-sports television show in the world.

3M Scotch Tape and Peltor Brands pro Ray Scheide of Dover, Ark., will again represent 3M throughout the season. Scheide is a five-time Forrest Wood Cup qualifier and has accumulated more than $760,000 in winnings throughout his 10-year FLW career.

ABOUT FLW
FLW is the industry’s premier tournament-fishing organization, providing unparalleled fishing resources and entertainment to our sponsors, fans and host communities. FLW is offering anglers of all skill levels the opportunity to compete for millions in prize money nationwide in 2013 over the course of 231 tournaments across five tournament circuits, four of which provide an avenue to the sport’s richest payday and most coveted championship trophy – the Forrest Wood Cup. FLW is committed to providing a lifestyle experience that is the “Best in Fishing, On and Off the Water,” through a variety of platforms including tournaments, outdoor expos and FLW Fantasy Fishing. For more information about FLW and FLW Fantasy Fishing, visit FLWOutdoors.com or FantasyFishing.com and look for FLW on Twitter, Facebook, Pinterest and YouTube.