Aptly named, The Independent Golf Reviews has completed a thorough review of 1SwingThought.com's appliques and have given them very high marks for improving the golf swing. 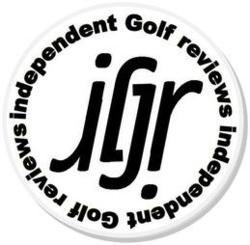 I started off with the Swing Eaassyy Sticker on my driver...It really then becomes the one swing thought that you will have as you swing. It works! I could feel myself swinging easily and releasing tension really did help with distance.

Ryan Heiman, founder of Independent Golf Reviews started as a member on a number of major golf forums, constantly on the search for new products that worked. It was a trial and error for the most part. He thought it would be great to write reviews about his experiences. Ryan learned the art of reviewing from one of the best reviewers around and in time he created IGolfReviews.com . It is an advertisement-free site of reviews only, whose goal is to offer neutral, unbiased, thorough reviews of clubs, courses and accessories including both positive and the negative aspects.

"We are thrilled that Independent Golf Reviews is reporting to it's subscribers the good news about our 1SwingThought.com game improvement stickers. We know that the overwhelming majority of golfers who try our products see their games improve. With the positive reviews we are getting from golf publications, like Golf Digest and Independent Golf Reviews, we are hopeful that our golf swing improvement stickers will not long remain the secret of a select few" stated Bryon K. Smith, CEO of 1SwingThought.com.

According to Heiman, "I started off with the Swing Eaassyy Sticker on my driver...It really then becomes the one swing thought that you will have as you swing. It works! I could feel myself swinging easily and releasing tension really did help with distance."

In addition to the improvements in the golf swing provided by the stickers, they also passed durability, removability and driver compatibility tests with flying colors stated Heiman, "You don't have to worry about damaging the paint on your driver, the stickers are easy to apply and peel right off if you want to remove them. They held up nicely while on the club too. After a couple rounds of a headcover going on and off the club, there was no corner lift or any issues with it coming off on its own. I even switched out stickers as I was trying a couple of different models."

Furthermore, according to Heiman, "1 Swing Thought is a very effective way to lower your scores, because it works. What I really liked was the cards that come with the stickers that I kept in the glove box of my pushcart. I would look at them before my shot and it really helped with my drives."

Additionally, Heiman stated, "Another nice little feature of 1SwingThought are their online video lessons that correspond to each sticker thought. They can be really helpful to visualize what the sticker is talking about. These videos complete a really nice training aid package."