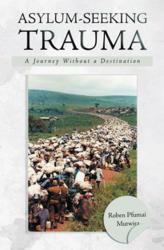 Throughout history, the United Kingdom held a proud tradition of aiding people seeking political asylum. In the present day, however, this custom has seemingly fallen short of the nation’s traditional standards. According to “Asylum Matters: Restoring Trust in the UK Asylum System” published in 2008 on The Centre of Social Justice website,

“When asylum seekers arrive in the UK they are all too often met by a bureaucracy that fails to assess their claims fairly: more than 20 per cent of refusals are overturned on appeal. If asylum is refused, asylum seekers are often left without support and usually without permission to support themselves through work.”

Roben Pfumai Mutwira was one of the thousands of asylum seekers who endured this plight. Formerly a lecturer, trainer of teachers and an author in his home country of Zimbabwe, Mutwira found himself destitute in the United Kingdom for five years. He was not allowed to work, he had no place to stay and survived only on donations. In “Asylum-Seeking Trauma: A Journey Without a Destination”, he shares this harrowing episode in his life. From the turmoil in his home country to the arduous journey of escape to the destitution he faced in the United Kingdom, Mutwira bravely tells his story and in doing so he gives voice to others who have also met similar challenges. The author says,

“Some (asylum seekers) are unable to retell their stories because of the amount of suffering they experienced in the different countries they passed through. But there is nothing more painful than being told that what you suffered was a lie, and then being detained and deported to the very countries you had run away and setting your mind to receive the treatment you thought you had escaped. This book appeals to people in authority to please believe the stories of asylum seekers; give them a new home; a job and a future.”

A true story of survival and courage under fire, “Asylum-Seeking Trauma” will open the reader’s eyes to the ordeals that asylum seekers undergo both in their home and in the country where they hope to start a new life.

About the Author
Roben Pfumai Mutwira was once an asylum-seeker who ended up living in destitute in the United Kingdom for five years. He was a lecturer, a trainer of teachers and a co-author of a textbook series in his home country of Zimbabwe. He wrote “Asylum-Seeking Trauma” as an effort to appeal to people in host countries to give asylum seekers a chance to contribute to the development of their new homes.