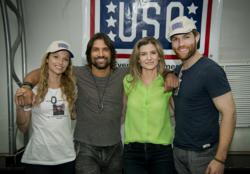 I know I speak for us all when I say ‘thank you’ to the men and women of the U.S. Armed Forces for keeping us safe and for all that you do.- Liam McIntyre

When four cast members from the STARZ hit series “Spartacus” visited troops serving in the Middle East, sparks were sure to fly. As part of their first USO/Armed Forces Entertainment tour, the warrior actors from “Spartacus” heard first-hand about military life from real-life warriors - our nation’s men and women in uniform. In addition to spending some one-on-one time with troops, the ensemble of actors delivered a much-needed break to our men and women in uniform.
DETAILS:

The cast is excited about the upcoming final season, “Spartacus: War of the Damned,” which will premiere in the US on the STRAZ television network on Friday, January 25th, 2013.

Attributed to Liam McIntyre:
“This trip has been amazing for all of us. The men and women we met, who put their lives on the line everyday, are an amazing group of people. Being able to share my first USO tour experience with my cast mates makes it even more memorable. I know I speak for us all when I say ‘thank you’ to the men and women of the U.S. Armed Forces for keeping us safe and for all that you do.”