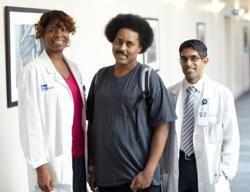 On Oct. 25, 2012, Daquain Jenkins, 28, became the first SynCardia Total Artificial Heart patient in the tri-state area to be discharged home using the Freedom® portable driver. Wearing his Freedom driver in the Backpack, he is pictured with Kim Ashley, Program Manager in Cardiothoracic Surgery, and his cardiologist Ajith Nair, MD, at The Mount Sinai Medical Center in New York City.

We believed that the SynCardia Total Artificial Heart was the only hope of saving Daquain’s life, and as part of Mount Sinai’s commitment to providing the best care for our patients, we made sure he got it.

SynCardia Systems, Inc., manufacturer of the world’s first and only FDA, Health Canada and CE (Europe) approved Total Artificial Heart, announced today that The Mount Sinai Medical Center in New York City, has become the first hospital in the tri-state area to discharge a patient implanted with the SynCardia temporary Total Artificial Heart. On Oct. 25, Daquain Jenkins left the hospital to wait for a matching donor heart at home using the Freedom® portable driver to power his Total Artificial Heart.

“We believed that the SynCardia Total Artificial Heart was the only hope of saving Daquain’s life, and as part of Mount Sinai’s commitment to providing the best care for our patients, we made sure he got it,” said Dr. Anelechi Anyanwu, Associate Professor of Cardiothoracic Surgery. “The portable driver will help him maintain his quality of life as he will be able to go home, enjoy being with his kids, and resume his activities of daily living.”

Mr. Jenkins, 28, says he is grateful the Freedom portable driver will give him the opportunity to walk his kids to the bus stop; a simple task he was unable to do when his first heart transplant failed.
“Without this device, I wouldn’t be here,” said Mr. Jenkins. “Now, I take everything life brings me with a smile.”

At age 25, Mr. Jenkins was diagnosed with congestive heart failure when he went to the doctor with symptoms of pneumonia. His father had died of heart failure at age 28. Mr. Jenkins began medical therapy, which worked for a year before he started experiencing symptoms again. He was implanted with a pacemaker and a defibrillator at a local hospital, but his condition continued to deteriorate.

Both sides of Mr. Jenkins’ donor heart were failing rapidly. To save his life, a team was assembled and certified in two days, the SynCardia Total Artificial Heart was flown in from Arizona and on Aug. 17, doctors performed Mount Sinai’s first implant during an eight-hour surgery, proctored by world-renowned heart surgeon Dr. Jack Copeland.

On June 18, 2012, SynCardia was honored with two Gold Stevie® Awards at the 10th Annual American Business Awards. SynCardia won "Company of the Year – Health Products and Services" and "Most Innovative Company of the Year – up to 100 Employees." See the full list of SynCardia Awards & Recognition, which includes accolades from Forbes, Fast Company and more.