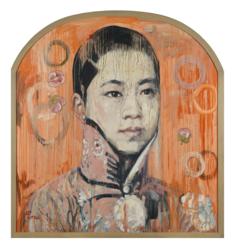 Alter formed the collection with the intention of placing it in a public institution to help women artists gain more visibility and be integrated into museum exhibitions and public programming alongside their male peers.

The Pennsylvania Academy of the Fine Arts (PAFA) presents The Female Gaze: Women Artists Making their World, on view for the first time November 17, 2012 – April 7, 2013, an exhibition of over 200 works from the Linda Lee Alter Collection of Art by Women of almost 500 works donated to PAFA in 2010.

Alter wished to form a collection of art made by women that eschewed a single philosophy, style, or political viewpoint. Diversity and a multiplicity of voices—a community of artists immersed in and making sense of their world—is what she chose to collect. In that sense, The Linda Lee Alter Collection of Art by Women has but two common threads: all of the artworks in the nearly 500-object collection were made by women and selected/brought together by a woman. Alter formed the collection with the intention of placing it in a public institution to help women artists gain more visibility and be integrated into museum exhibitions and public programming alongside their male peers.

"Taking 'ways of seeing' as its focus, The Female Gaze is organized around three prominent themes from the collection: 'selfhood and community;' 'politics;' and 'nature and ecology,'" says Dr. Robert Cozzolino, PAFA's Senior Curator and Curator of Modern Art and curator of The Female Gaze. "Within each section visitors will experience the diverse range of styles, working methods, and viewpoints that the artists brought to common themes. This highlights one of the central aims that the Philadelphia-based artist, collector, and philanthropist, Linda Lee Alter had for her collection. She wanted the work of women artists to be more visible and to form a collection that resisted easy categorization. Its eclecticism and surprises bear its strength."

There are core groups of artists in the collection who have been nationally active but particularly influential on traditions in Chicago, Philadelphia, and San Francisco, as well as New York. Alongside academically-trained artists, Alter collected those who were self-taught; methods associated with "craft," such as ceramics, needlepoint, and quilting appear in dialogue with what had been called "the fine arts"—painting, sculpture, drawing, and printmaking.

"The donation of Linda Lee Alter's collection is extraordinarily meaningful for PAFA," says Harry Philbrick, The Edna S. Tuttleman Director of the Museum. “Her work as a collector and as the founder of the Leeway Foundation has always stressed a concern for helping women become visible in public institutions and elsewhere. PAFA has a long history of supporting women artists, dating back to the beginning of the 19th century and we are truly grateful for this addition to our collection."

Linda Lee Alter began collecting art by women in the mid-1980s, building a remarkably diverse and powerful collection that includes some of the most influential female artists of the past 50 years. From the outset she hoped that the collection would find a home in a museum so that it could be integrated into the public life of an institution, rather than kept separate as an anomalous thematic collection.

Exciting exhibit-related programs and events will occur throughout the run of the exhibition, including a Women’s History Month Art History Lecture Series, and a Graduate Symposium on Women in American Art.

The exhibition is accompanied by a compressive catalogue containing full-color images of nearly all works in the Linda Lee Alter Collection. After its debut showing, PAFA will make the collection available for a national tour to a wide range of venues beginning in Summer 2013.

An online archive that includes information on each work in the Linda Lee Alter Collection is available at http://www.pafa.org/LindaLeeAlterCollection.

Founded in 1805, the Pennsylvania Academy of the Fine Arts (PAFA) is America's first school of fine arts and museum. A recipient of the 2005 National Medal of Arts presented by the President of the United States, PAFA is a recognized leader in fine arts education. Nearly every major American artist has taught, studied, or exhibited at the Academy. The institution's world-class collection of American art continues to grow and provides what only a few other art institutions in the world offer: the rare combination of an outstanding museum and an extraordinary faculty known for its commitment to students and for the stature and quality of its artistic work.