Author A.W. Hopkins announces the release of ‘The Blue Society’ 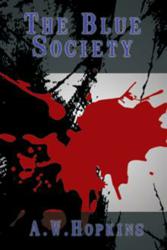 What happens when the police officers form a society to rid their own department from an unwanted group within the department?

In his new mystery novel “The Blue Society” (published by iUniverse), author A.W. Hopkins tells a story of a police officer’s murder and the investigation that turned up surprisingly vicious corruption and cruelty within a police department.

Linda Gomez’s excitement after graduating from the police academy and being assigned to Precinct 105 in the Cicero District of Chicago was quickly ebbed. She is partnered with Officer Walker, a chauvinistic and unkind cop who quickly shows her how dangerous the job can be. When Gomez is found dead, the victim of a murder, two veteran detectives take the case which they approach as a hate crime – Officer Gomez was a lesbian. What the investigation soon turns up is whispers of a secret vigilante group, called the Blue Society, which might be behind a plot to rid the police department of gay officers.

An excerpt from “The Blue Society”:

Just because men put on the blue uniform doesn’t mean they are exempt from the law but must serve the law.

What happens when the police officers form a society to rid their own department from an unwanted group within the department?

Hopkins hopes his book entertains readers, especially fans of mystery and detective novels, but he also hopes it brings the issue of hate crimes into the light. “It seems that the topic of gays is a very touchy subject but yet a real one,” says Hopkins. “Most writers are staying away from it. Me, I know that this is a problem and I want it brought out within a police department.”

“The Blue Society” is available through most major booksellers, including Amazon and Barnes and Noble.

About the Author
A.W. Hopkins is originally from Bryan, Ohio. He served in the U.S. Air Force for four years and is now retired. Hopkins lives and writes in Shoals, Ind. where he works part time as a security officer at a casino.