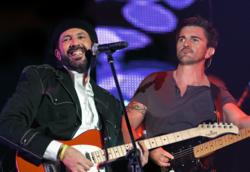 Juan Luis Guerra (left) and Juanes (right) are set for a benefit performance Nov. 24 at Barclays Center to assist victims of Hurricane Sandy.

Music superstars Juanes and Juan Luis Guerra today announce they will soon be taking to the stage to assist victims of Hurricane Sandy. The two Latin music icons, in partnership with Barclays Center and producer Cardenas Marketing Network (CMN), will be donating all proceeds from their highly anticipated November 24th concert to the American Red Cross – to support ongoing efforts to aid victims of last week’s devastating disaster.

“We’ve both been blessed to have had extraordinary support throughout our careers from fans in the New York area and across the Caribbean. With so many people from these regions now facing immense hardships, we want to show our deep appreciation by utilizing our music to both raise spirits and more importantly, raise much-needed funds to help them through these times of great need.” – Juanes & Juan Luis Guerra

Set to take place shortly after the upcoming LATIN GRAMMY Awards, where Juan Luis Guerra and Juanes hold a combined 10 nominations, the special November 24th (8:00 p.m.) benefit show will mark the first-ever Latin show at the new, state-of-the-art Barclays Center. Tickets can now be purchased via http://www.ticketmaster.com or by calling 1-800-745-3000.

“Hurricane Sandy has devastated the lives of many people and we are eager to work with the Red Cross as they provide assistance for those affected,” said Henry Cardenas, Chief Executive Officer/President of CMN and co-founder of the Maestro Cares Foundation. “All proceeds from our show will go toward the Red Cross and we invite music goers and the community at large to support them and work quickly towards providing comfort to those who have lost so much.”

More than 5,000 Red Cross workers from all over the country are supporting shelters, providing food and water at fixed sites, and driving through neighborhoods to distribute meals and supplies throughout the affected areas including New York, New Jersey, Pennsylvania and Connecticut.

“The devastation brought by Hurricane Sandy has affected millions of people, but thanks to the support of generous donors such as Juan Luis Guerra, Juanes and CMN, the Red Cross is there for them, providing immediate relief now, and staying on the job as people move toward recovery,” said Roger Lowe, Senior Vice President of Communications of the American Red Cross. “We’re grateful for their dedication to helping the Red Cross help those who need us.”

Goya, the presenting sponsor of the show, has donated 300,000 pounds of Goya products and 25,000 meals to victims, while the Department of Tourism of the Dominican Republic, an inviting sponsor, is also providing support to those affected by Sandy.

About the American Red Cross
The American Red Cross shelters, feeds and provides emotional support to victims of disasters; supplies about 40 percent of the nation's blood; teaches skills that save lives; provides international humanitarian aid; and supports military members and their families. The Red Cross is a not-for-profit organization that depends on volunteers and the generosity of the American public to perform its mission. For more information, please visit redcross.org or join our blog at http://blog.redcross.org.

JUAN LUIS GUERRA
Juan Luis Guerra and his band, 4:40, have sold over 30 million records and won numerous awards including 12 Latin Grammy Awards, two Grammy Awards, and two Latin Billboard Music Awards. He is one of the most internationally recognized Latin artists in the modern era. Guerra blends the perfect mix of merengue, bolero and Afro-pop/Latin fusion, resulting in universal hits such as "Ojalá Que Llueva Café" ("Wish It Would Rain Coffee"), “Bilirubina” and “El Costo de la Vida” (“The Price of Life”). A remix of his hit “La Llave de Mi Corazon” (“Medicine for My Soul”), with Taboo from The Black Eyed Peas, is a testament to his ability to fuse genres. A devout humanitarian, he established The Juan Luis Guerra Foundation in an effort to help children with disabilities and in need. He has supported the World Pediatric Project and has performed in benefit concerts including one for the Haiti earthquake victims. Guerra received Billboard’s Spirit of Hope Award in 2005, was named the 2007 Latin Recording Academy’s Person of the Year and was designated the UNESCO Artist for Peace in 2008, lending his support to UNESCO’s action for youth violence prevention.

JUANES
With six solo albums to his credit and multi-platinum sales of over 15 million copies, Juanes is the world’s leading all-Spanish language rock artist - Both a GRAMMY and 17-time LATIN GRAMMY winner with eight #1 singles on Billboard’s “Hot Latin Songs” chart. His most recent album, “JUANES MTV Unplugged” was released on May 29th of this year and quickly debuted at #1 on Billboard’s “Top Latin Albums” chart and in 18 countries throughout Latin America. Juanes is also frequently recognized as one of the Spanish-speaking world’s leading social media voices with an online following of over 10 Million fans. The Colombian superstar’s dedication as a global activist also extends far beyond his passionate lyrics and is seen in his wide ranging charitable work for his own Mi Sangre Foundation and as a co-founder of the "Paz sin Fronteras" (Peace Without Borders) organization - which utilizes music to unite populaces regardless of political or geographic divides and advocate that all people are entitled to the basic human right of peace.

About Cardenas Marketing Network
Founded in 2003 by Henry Cardenas, Cardenas Marketing Network (CMN) is an independently owned, multicultural event marketing and sponsorship agency that creates brand impact through award-winning campaigns featuring music tours, sporting events and other interactive experiences that captivate target consumers across the nation. In 2011, CMN produced more than 2,500 live events for clients such as Wrigley, Anheuser-Busch, McCormick, H&R Block, General Motors and Goya, among others. With offices in Chicago, Los Angeles, Miami and New York, and a dynamic, results-driven team, CMN applies strategic thinking and flawless execution to deliver value for clients anywhere in the country.