Sold out. That’s the current status of 13 of the 39 upcoming Maroon 5 2013 Overexposed Tour dates, including three mid-February shows in New York City, Manchester, New Hampshire and Toronto. The pop/rock band’s 2013 Overexposed Tour leg begins March 13, 2013 in Columbus Ohio and ends July 3, 2013 after eight dates in the United Kingdom. Neon Trees and Owl City are set as special guests for the North American trek, with PJ Morton replacing Owl City for the U.K. dates. “Although roughly a third of the group’s tour dates are already sold out, we still have a large selection of Maroon 5 tickets available,” said Felina Martinez at BuyAnySeat.com. “We’re advising fans to lock in their tickets as soon as they can.” 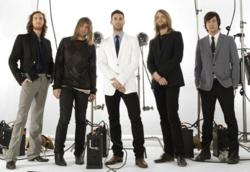 Maroon 5 is red hot. Roughly four months before their 2013 Overexposed Tour is set to kick off, 13 out of their 39 upcoming dates are already sold out.

The American pop/rock band originated in Los Angeles, California as a so-called garage band named Kara’s Flowers. They released one album in 1997. After briefly disbanding, the group reformed as Maroon 5 to pursue a more pop-oriented direction and released their debut album, Songs About Jane, in 2002.

Not only did the album unleash four hit singles, it shot to major chart success, going gold, platinum and triple platinum in many countries around the world. After several more hit albums and three Grammys, the band released their fourth studio album, Overexposed, in June of 2012 and logged their third number one single on the Billboard Hot 100.

“Maroon 5 fans have been going online for tickets in massive numbers,” said Felina Martinez at online ticket marketplace BuyAnySeat.com. “The band sold out many of their dates during this year’s Overexposed Tour, and it looks like the trend is continuing.”

“Although many of the upcoming performances are officially sold out, we’re proud to be able to offer fans a complete selection of discount Maroon 5 tickets, with a worry-free guarantee to protect their purchase,” said Martinez.

Maroon 5's biggest hit to date is “Moves Like Jagger” featuring Christina Aguilera. The track has sold over eight million copies worldwide as of June 2012, thereby becoming one of the best-selling singles of all time. In addition, during their recent Overexposed Tour in South America, the band performed in front of 30,000 raving fans at Arena Anhembi in São Paulo, Brazil – their biggest gate to date. Since debuting in 2002, the band has sold over 10 million albums in the United States and won numerous awards worldwide.

The tour’s special guests include Neon Trees, Owl City and PJ Morgan, who is replacing Owl City for the U.K. dates. Neon Trees, an American rock band, released their first album, Habits, in 2010. Their first single “Animal” hit Number 13 on the Billboard Hot 100 and number one on the Alternative Rock Chart.

Owl City, an American electronica project by singer-songwriter and multi-instrumentalist Adam Young, went mainstream in 2009 with the quadruple-platinum hit single “Fireflies”. PJ Morgan is a Grammy Award-winning writer and producer as well as a solo artist. He’s also the stand-in keyboardist for Maroon 5.