“Rock” the Luckiest Man in Pop an Autobiography by Andros Georgiou

The life story of George Michael from the only person who really knew him. Available now on Amazon Worldwide 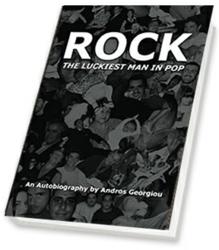 “Rock” the Luckiest Man in Pop an Autobiography by Andros Georgiou

“ROCK” is a story Andros wanted to tell the fans of George Michael, for a long time

“ROCK: The Luckiest man in pop is in its 3rd day third day of Exclusive Run of Excerpts in The Sun Newspaper.

“ROCK: THE LUCKIEST MAN IN POP” written by Andros Georgiou is the story of a man’s life during one of the most magnificent periods of rock ‘n’ roll history never to be seen again and the story of two men and a friendship shared since birth until it ended abruptly.

“ROCK” was Andros Georgiou. “YOG” was George Michael. The two were together since birth and then side by side for the next thirty seven years, and during that time, they were both part of a time in music history that the world will never see again.

THE LONDON SUN, with a readership of 8 million worldwide, is now into its third day of printing excerpts from the Andros’ book with exclusive photos provided by Andros from his personal catalogue that are not in the book and will not be seen anywhere else.

“ROCK” is more than just a life recounted or a guilty pleasure for its reader or fan of George Michael. The release of this book is also a plea by its author for your help who wants to mend a relationship that became inexplicably and irrevocably broken.

“ROCK” is a story Andros has wanted to tell the world, especially the fans of George Michael, for a long time; this is his life story in his own words a direct and honest account of standing next to one of the greatest rock icons of our time.