Jackson Dickson and Randall Atkins operate a daisy chain of offshore businesses. But is their real business actually murder? 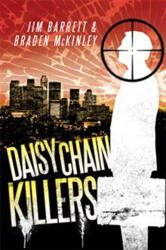 Jackson Dickson, a Texan financial consultant understands the profitability of hiding money in off-shore corporations. He operates companies in Mexico, Panama, the Cayman Islands, and just about any place where local laws are conducive to concealing dollars. His crime partner, Randall Atkins is an edgy little man from the East Coast who bills himself as a business consultant specializing in mining claims, some real, some imagined. Enter Bill Fermey who owns several apple orchards in Washington State. This extremely wealthy farmer soon becomes the focus of Dickson and Atkins as the pair scheme to rip him off, and, in the process, murder him.

In their compelling novel entitled Daisy Chain Killers, Jim Barrett & Braden McKinley tell a powerful story of the machinations of the crime tandem of Jackson Dickson and Randall Atkins. When the book opens, their first target is Bill Fermey. Fermey is convinced by Dickson that he should open an offshore account to hide money from the Internal Revenue Service. Of course, the money, $100,000.00 was placed into one of Dickson’s fictitious companies. The deal is that Dickson will get 10% of the amount for holding the money, but ends up with all of the money after he and Atkins murder the victim. But, the murders don’t stop there. These greedy “businessmen” lure others into their web, convincing one man, who was living on the streets in Austin, that he should become the CEO of an off-shore company. When he accepts the job, sobers up, and agrees to a million dollar “key man” life insurance policy, he is murdered in Mexico and the two businessmen are all the richer.

Enter two Irish Detectives from the Ventura County Sheriff’s Department, Brian McKenna and Max McQuillin who catch the Fermey case. Both highly experienced homicide detectives soon learn that they are in the case of their careers as the tentacles of Dickson and Atkins reach around the world. And as they struggle with this investigation, the reader learns that these two have their own demons that they must excise in order to solve the crimes which continue to unfold in front of them.They do have one helpful clue in the murders. At the time of death, all of the victim’s have their right ear cut off. Why do the murderers find it necessary to leave this calling card and what does this unusual M.O. have to do with these crimes being solved?

A well-written story that provides excellent transitions of events and characters as they slowly unfold, Daisy Chain Killers is one grippingly powerful read fit for those who are into the crime investigation genre. Barrett & McKinley penned a masterpiece novel that is sure to become a hit.
For more information on this book, interested parties may log on to http://www.Xlibris.com.

About the Authors
Jim Barrett is a retired captain with the Ventura County Sheriff’s Department in California after nearly 31 years of service. During that time, Jim spent years in detectives, investigating all matter of crime from burglaries to murder. He is the author of three other published books; several screen plays and a collection of short stories which is soon to be published. He makes his home in Northern California and Idaho. Braden McKinley was born in Western Pennsylvania and schooled locally. In 1962, he married his high school sweetheart, Nancy. He joined the Ventura County Sheriff’s Department in 1965, and rose to the rank of Lieutenant before accepting an appointment as Chief Investigator with the District Attorney’s Office. He retired in 1993. He has produced or performed in a hundred stage plays and a television series. He makes his home in California.