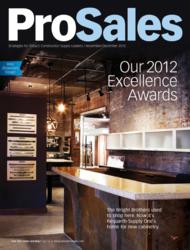 The PROSALES Excellence Award winners proved that, even as we come out of the worst housing crisis since the Great Depression, building material dealers were making investments and finding creative ways to attract new business and improve operations.

The PROSALES Excellence Awards honor outstanding achievements in construction supply in showroom design, facility design, technology, marketing and customer service, advertising, and websites. The awards program celebrates business leaders whose creativity and ingenuity have not only improved and reinvigorated their own companies, but also set new benchmarks for service in the entire industry.

The 2012 Excellence Awards winners, locations and categories are:

Dealers and distributors competed in six different categories: Best Advertisement, Best Marketing Campaign, Best Website, Best Showroom, Best Facility Design, and Best Use of Technology. A panel of four independent judges then decided which entries, regardless of the category, achieved excellence and which other entries had shown enough to be worthy of merit.

“The 2012 PROSALES Excellence Award winners proved that, even as we come out of the worst housing crisis since the Great Depression, building material dealers were making investments and finding creative ways to attract new business and improve their,” said Craig Webb, editor-in-chief, PROSALES magazine. “Requarth-Supply One turned a warehouse where the Wright Brothers once shopped into a showroom that is helping revive downtown Dayton. TW Perry created a Quality Assurance System in which it employed various types of technology as stepping stones to help it spot, analyze, and correct problems. Hartville Hardware made a giant bet on its northeastern Ohio market by building what may be the world’s largest hardware store—a box three times bigger than the usual Home Depot, but one that still is easy for professional builders to use. And Parr Lumber built fame and expanded its reach by creating its own weekly radio show for do-it-yourselfers.”

As for the Merit Award winners, Ganahl was honored for its creative adaptation of two car dealerships into a lumberyard on the same Pasadena, Calif., street where the Rose Bowl Parade takes place. Malone won for setting up a Ladies Night that combined TLC with advice on home projects. Nisbet Brower was honored for the new approach to customer service it employed when creating its latest showroom. And Poulin Lumber won a merit prize for implementing technology that dramatically improved how it delivers materials to customers’ jobsites.

Stories about each winning entry are featured in the just-released November/December edition of PROSALES. The three Grand Prize winners also will receive a $500 check to give to the charity of their choice, while the five Merit Award winners will get $150 checks. For complete Excellence Awards coverage, visit http://www.prosalesmagazine.com/excellence.