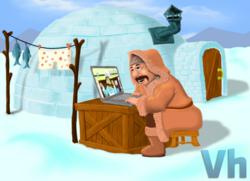 Streamlining the hiring process for both companies and job seekers, Video Hire is dedicated to unveiling values on both sides of the interview desk, often simply with a two-minute video.

Video Hire, a new and unique interactive job-search platform, promises to change the face of the recruiting process with a personal, engaging and green means of connecting hiring employers with prospective candidates.

Streamlining the hiring process for both companies and job seekers, Video Hire is dedicated to unveiling values on both sides of the interview desk, often simply with a two-minute video. It eclipses the one-dimensional résumé and traditional first interview in one step by getting to the heart of matter: are the company and candidate good fit for each other?

“A lot of interviewees get called in because of their résumés, but when they’re called in for an interview, personality and behavior are the competing factors,” said Director of Operations Felicia Moghadam MA. “When employers watch the two-minute videos, they get an idea for candidates’ strengths and personalities, as well as how they speak and present themselves. These attributes will not be as questionable as they were before.”

Video Hire offers a number of options for both job seekers and employers. A job seeker can create his or her own two-minute video by simply recording from the computer camera or uploading an edited video. The video resides in the center of the candidate’s profile, along with a detailed resume on the right. The left side of the profile features answers that aim to narrow down the type of job the candidate is looking for. The candidate directs hiring managers to the page in place of a traditional résumé through direct mail and social media avenues.

Employers can also produce videos in which they describe what they’re looking for in a candidate, as well as attempt to attract top talent and make a bigger, more captivating impression of the company. Several employees can participate, providing candidates an idea of who their co-workers would be.

“With company videos, job seekers can get an open-curtain view of what the company’s values are, who is in charge, what the culture is like and what the company is looking for in a candidate,” said Moghadam. “It’s a much more engaging way of seeing the company, and that attracts talent.”

Through Video Hire, companies and job seekers can also participate in live Skype-enabled interviews, and a small company can generate business or new clients by posting a video about its talent and services. Video Hire is flexible enough that it can be used to secure full-time or freelance employment in any industry. It can even be used for auditions in the entertainment industry.

Moghadam, who holds a master’s degree in industrial organizational psychology and several certifications in workplace coaching and leadership, says Video Hire is on the cutting edge of the changing employment landscape. It reflects hiring managers’ increasing disinterest in the résumé cover letter, making the introduction to the candidate more direct and meaningful.

The site aims to launch by November 30, and Facebook users can follow its progress. At the onset, Video Hire will be a free service to both companies and job seekers as they get acquainted with its benefits. Moghadam says her company will measure feedback and worth to users before putting a price on its service, but she believes anyone would have no trouble recognizing its value.

Video Hire is a new and unique interactive job-search platform that connects hiring employers and prospective candidates in a personal, engaging and green way. Streamlining the hiring process, Video Hire unveils values on both sides of the interview desk, for part-time, freelance and contract work in any industry. It saves time and resources and reduces the stress in reaching the ultimate job-search goal: finding the right fit. More information can be found at the company’s Facebook or YouTube pages or by calling (855) 456-2583.