New survey data shows that more than 59 percent of US expatriates polled feel they should not have to file US taxes. In light of the government's proposed 2013 tax plans, what are the US expat tax implications? What can Americans living abroad do now to plan for their 2013 US expat taxes? 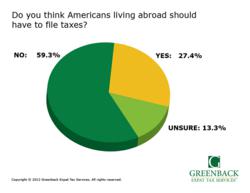 Despite these potential tax increases next year, US expats shouldn’t fear, said Mr. McKeegan. There are a number of significant and beneficial opportunities for US expats...

New survey results show that more than 59 percent of US expatriates polled do not feel they should have to file US expat taxes. Released by Greenback Expat Tax Services, a US tax planning, filing, and reporting service for Americans living abroad, the data is of particular significance given the government’s 2013 proposed tax plans.

“Our data speaks volumes to the concerns our expat customers face when it comes to their US expat taxes,” said David McKeegan, Greenback Expat Tax Services President. “We know from previous data that the vast majority of them don’t feel fairly represented by the US Government,” he continued. “Now, they face potential tax increases with Medicaid, Medicare, capital gains, and income taxes.”

Under the Obama Administration's projected tax plans, Medicaid may increase by 2.9 percent and Medicare by 3.8 percent, which could impact self-employed expats. Capital gains may see a jump from 15 percent to 20 percent, while personal income tax for families and individuals are also slated for increases.

“Despite these potential tax increases next year, US expats shouldn’t fear,” said Mr. McKeegan. “There are a number of significant and beneficial opportunities for US expats, including special deductions and credits, as well as the most important one, the Foreign Earned Income Exclusion,” he said.

The Foreign Earned Income Exclusion was created by the IRS to help US expats avoid dual taxation. According to Mr. McKeegan, the income an expat makes outside of the US is subject to identical tax rates to someone who is working and living inside the US. However, there are specific qualifiers that allow US expats to avoid paying income taxes in both countries. Those qualifiers include earning foreign income, passing the IRS’s Bona Fide Residence or Physical Presence Tests, and establishing the foreign country as the tax home. Qualifying US expats can exclude up to $95,100 from their 2012 US expat taxes. This does not however impact self-employment taxes, which are set to rise.

“In light of the 2013 tax projections, US expats can also take advantage of their capital gains now before the 5 percent increase next year,” said McKeegan. “There are also tax provisions expiring at the end of the year as well as an AMT patch that can be implemented,” continued Mr. McKeegan. “Lastly, estate and gift taxes are also another important area,” he said. “Ultimately, planning now for these potential increases may save American expats substantial savings on their US expat taxes.”